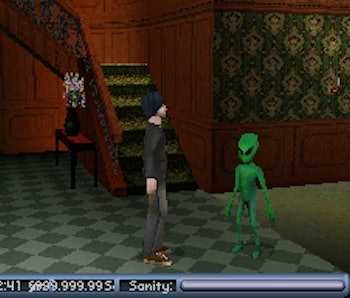 Let’s talk about the handheld versions of The Sims for a hot sec. In early iterations of the popular franchise, handheld ports bore only a passing resemblance to their PC-bound siblings, often turning the simulator into a product equal parts horrifying and comedic.

A Reddit thread unearthed by Kotaku takes a deep dive into The Sims 2’s very strange world — and serves as the perfect vehicle for reliving the curse nostalgia of the Nintendo DS’s first Sims game. And cursed it truly is.

“Even back in the day when I got this game for my ninth birthday, I immediately felt like there was something extremely off about it,” Redditor u/sundauys89 writes. “The atmosphere felt genuinely creepy at times and, of course, there was the threat of alien invasion.”

We don’t have a copy in front of us right now, but it’s clear from this thread that the DS version of The Sims 2 is, from beginning to end, weird as all hell. We could use more of that in contemporary gaming.

Welcome to Strangetown — Where the full-fledged PC version of The Sims 2 allows players to choose one of three neighborhoods to start off in, the DS port has a narrower scope. It drops players right in the middle of Strangetown, though “town” might be a bit of a stretch for what you find there. A store, an upscale hotel, a jail, and a run-down saloon, all cursed, cursed, cursed.

Most of your time in the DS game is spent running that hotel, but the events surrounding the characters are even stranger than what you’d expect from a normal Sims title. Here’s a shortlist of our favorite moments, as documented by Reddit:

Here’s some gameplay, courtesy of YouTuber Luipalooza, to give you a sense of the overall vibe:

Give us more weird games — The experience of playing The Sims 2 on the Nintendo DS is obviously singular. We’d be hard-pressed to think of a game that measures up in its general ability to be over-the-top uncanny.

This is particularly true of more recent gaming ventures — especially mainstream titles, which tend to prioritize polish over everything else. This makes for stellar gaming experiences, sure, but we really do miss the weirdness of old-school gaming.

We definitely wouldn’t complain if more companies retreated back toward the strangeness of The Sims 2’s DS port — not at all. In the meantime, we’ll just browse Reddit and reminisce. Oh, to be a hotel manager living in constant threat of organized crime, cow-cults, and alien invasions…