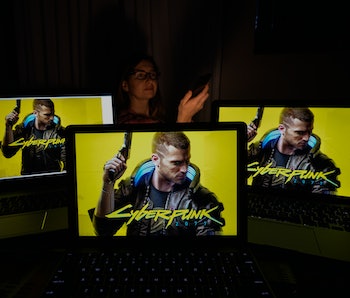 We’re now nearing half a year since CD Projekt Red released the much-hypedCyberpunk 2077 and the company’s big patches still haven’t managed to fix the game’s many, many bugs. And somehow, CD Projekt Red’s fearless leader still isn’t ready to throw in the towel.

In the developer’s first quarter financial report, president and joint CEO Adam Kiciński re-upped his commitment to the game despite its poor reception. “We intend to live up to what we promised our gamers in January,” Kiciński said while presenting the report. “While we already see major improvements, a large part of the team continues to work on making sure that Cyberpunk provides even better entertainment to gamers.”

Those are fighting words from CD Projekt Red, a company that has all but failed to deliver on any of the many promises it’s made to rapt fans in the last six months. With the game’s launch plans ruined, Kiciński and the rest of the CD Projket Red team have their sights set on the long-term. It’s going to take a lot more than words to buy back customer trust.

A long line of broken promises — The Cyberpunk 2077 saga has been, in the sagacious words of Input writer Andrew Paul, an “eternally raging dumpster fire.” Since the game’s initial release in December 2020, its developers have worked tirelessly to extinguish those flames — and though the game is reportedly more stable than it was six months ago, it’s still not done.

The game’s many problems are made much more difficult to stomach by CD Projekt Red’s penchant for high-flown promises. That’s how we ended up here in the first place: Cyberpunk 2077 was hyped to the extreme for many years leading up to its release, so the game itself felt all the more disappointing when it didn’t live up to those expectations.

This is what happens when you rush — At this point “nearly half” of the Cyberpunk 2077 team is still working full-time on course-correcting the game’s many problems. That’s a hell of a lot of people working on a game that officially released half a year ago. Perhaps it would’ve served CD Projekt Red — and its fans — to practice patience rather than blind hype.

CD Projekt Red says it’s learned some lessons from that hype implosion and will stop shooting for the sun so publicly. But it seems the company’s executives aren’t quite done making promises — for that’s what this investor meeting boils down to, really.

Kiciński is promising that the game will eventually be polished to perfection. But can we trust that affirmation after so many letdowns?