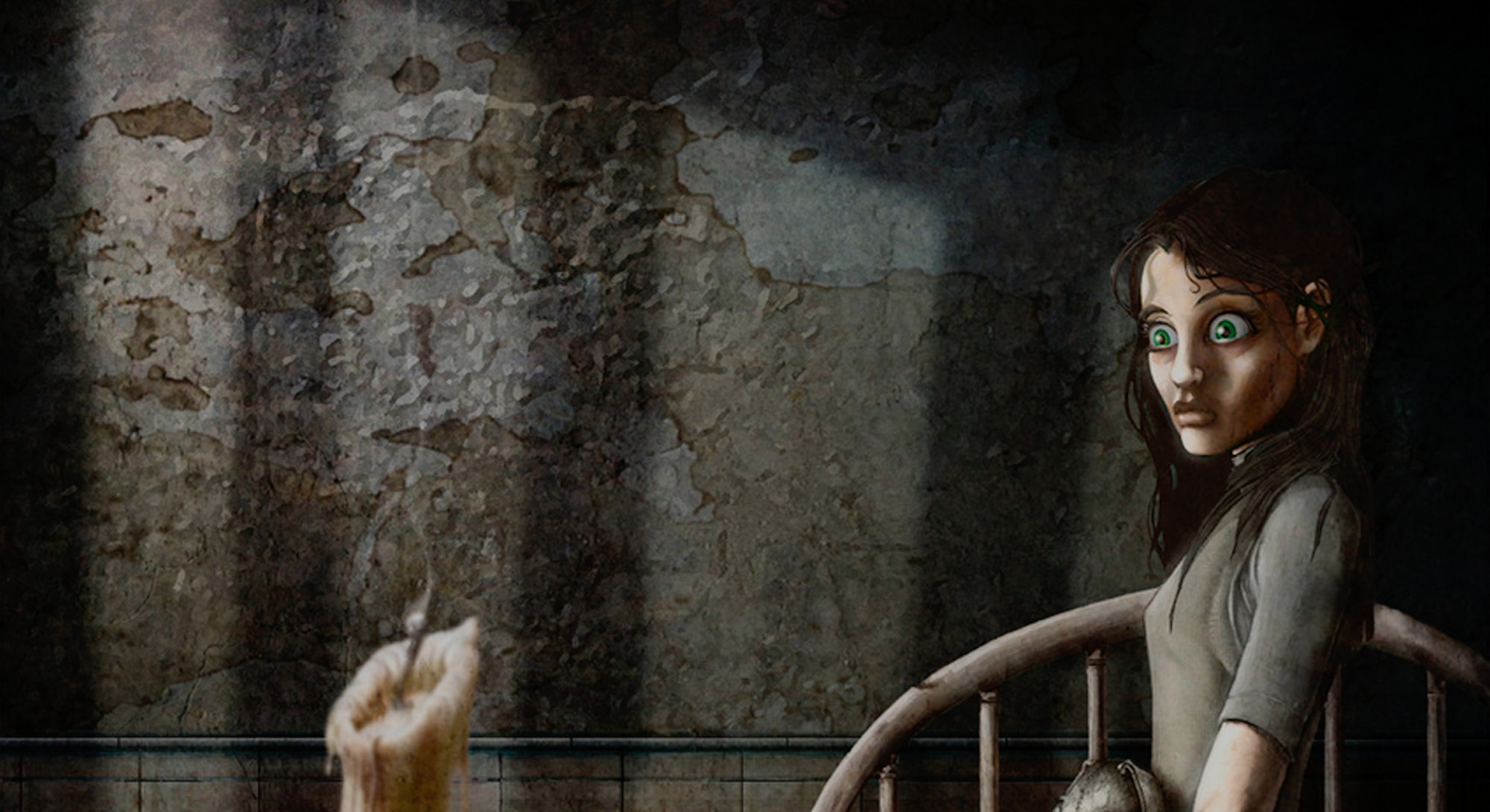 I am standing in a throng of bodies, all pumping geysers of blood from the blunted, meaty slabs where their heads — or for some, entire upper halves — used to be. The sound it makes (squelch) is viscerally satisfying, like paint glopped out of a tube in a preschool-learning cartoon.

They collapse one by one, staggering to a flat-backed fall or folding in on themselves like posters that have spent too much time rolled up. And then they’re gone, headless husks become small clouds of red, each leaving behind a crimson diamond that glows blue in the center. I collect them all and press onward.

Prior to this month, I hadn’t played or given much thought to American McGee’s Alice for at least a decade, probably even a little more. But now, hours-deep in the demented, fairytale-gone-revenge-slasher once again, well, it feels like coming home.

During a not-insignificant portion of my formative tween years, Alice was my life.

Game designer American McGee’s twisted vision of Lewis Carroll’s (already sort of creepy) Alice’s Adventures in Wonderland and Through the Looking Glass was published by EA in 2000 to mixed critical reception.

Reviewers raved about the storyline, a haunting narrative that picks up with the titular character catatonic in a psychiatric institution years after surviving a fire that killed her whole family. The art was striking for the time, and character design stood in a league of its own, rounded out by witty dialogue and poignant voice acting; your guide, the Cheshire Cat, as one reviewer noted, “delivers his lines in the manner of Anthony Hopkins' Hannibal Lecter from Silence of the Lambs.” But some found the linear gameplay lackluster, with repetitive combat and puzzle elements that were too easy to solve. Above all else, though, it was effective — evocative to a degree that got right under your skin and stayed with you after you stopped playing. Alice’s whimsical escapades had been spun in strange ways before, but never quite like this.

On the title page, a single unsettling image says it all: teenage Alice sitting wide-eyed on a hospital bed clutching a stuffed rabbit, her wrists wrapped in bloodied bandages. It is a journey into a tormented mind, nightmares and lived traumas turned into real and, crucially, killable creatures.

Perhaps that’s what hooked me so hard.

A journey into a tormented mind

Alice found me during a dark, confusing time several years after its release: middle school. I say that not with the usual shudder that tends to accompany our memories of life’s more awkward stages — I was lucky, in that regard, with a great group of friends and a sense of style I’m not entirely mortified to look back on. But my family had been dealt some pretty difficult cards and they all chose that moment to peak. My biggest concerns in the early 2000s should have been that my friends already had boyfriends and my mom wouldn’t let me wear thongs, but were instead that my dad was dying from ALS, and close-call asthma attacks kept landing me blue-lipped in the emergency room, and my health was in a constant state of decline but no one could figure out why.

Increasingly, I found I couldn’t connect with the interests of my peers. Everything just felt so… childish. Everything except the macabre.

Engrossed in horror fiction, I came alive. I read a lot of Stephen King, watched a lot of scary movies, I plastered my bedroom walls with posters of Victoria Francés’s melancholic vampires. Horror was my blood-soaked security blanket and, somewhere along the way, Alice became my outlet.

It was my mom who put the obsession in motion, really.

Speaking to her about it now, some 15 years later, she says she thinks the cover just grabbed her attention one day while wandering around the Tower Records (RIP) we used to frequent. “I was like, she’d love this, they’d [my brother and I] love this,” she says, and so she bought it.

As this was still the age of the “family computer,” though it was by then on its way out, playing Alice became something we all did together. My brother — slightly older than me and thus the expert of video games to my juvenile mind — played on Nightmare Mode and I jumped around behind him, clinging to the back of the chair and shouting in his ear. I played on an easier setting, following his guidance but stubborn enough to refuse help on the bosses I couldn’t beat.

“We all liked this same thing, we liked the graphics, the story — that game, we all had that in common,” she says. “When I see that game, it’s fond memories.”

“Maybe it wasn’t a game for kids,” she shrugs, “but it was a tough time, the family was broken. Things like this pulled us out of that. It kind of pulled us together, pulled us out of our grief and stress and unhappiness.”

“You could just dive into it,” she added.

“It pulled us together, pulled us out of our grief and stress and unhappiness.”

We ingested all the lore we could find and read the accompanying booklet, a fictional casebook penned by Alice’s doctor in the psych ward, cover to cover a million times over. I drew pictures of McGee’s emaciated Cheshire Cat and doodled my name in the style of the title’s thorned typeface. And I carved my way through grotesque card guards and hurled knives at shrieking demons, relishing the flames that shot out of their eyeholes when a fatal blow plucked them out of the sky.

I could hack and slash my way through distorted reimaginings of familiar characters from my childhood for hours on end, their existences warped, too, as a result of circumstances beyond their control.

“I barely recognize this terrible place,” Alice says to the hookah-smoking caterpillar at one point in the game. “What is it to me?” She later asks, “Why must I suffer?”

“Because your mind is fouled by self-deception,” he tells her. “Even your fantasies have fragmented into tortured versions of themselves. You are wracked with guilt because you survived. And you dread the prospect of a life alone.”

Destroy the Queen of Hearts, he says, and make everything right.

Alice’s quest for sanity, the ultimate goal of the game, was my quest for order. And rather than alienating me from my family, closing me off in an isolated bubble of consumption, it gave us something fun to do together in a time that was otherwise very bleak. It was our thing.

Looking back, it makes sense. Horror can be comforting, in its own odd way. In an interview at the beginning of 2021, nonfiction author and PTSD survivor Peter Counter explained that “horror media thrives on the border between the human experience and the unknowable.”

Moreover: “Horror grows from the discomfort of the human mind confronting the idea that the order we impose on our world is simply a coping mechanism to deal with the true chaotic state of the universe. It’s humbling. When order fails to be reinstated at the end of a narrative, rather than a sense of closure, horror encourages the audience to find acceptance. It removes our human agency. It decentralizes us.”

Horror can be comforting, in its own odd way.

Stephen Graham Jones’s novel, My Heart Is a Chainsaw, explores this idea masterfully. His protagonist, Jade, makes horror — slashers, specifically — her entire personality in the wake of trauma. It softens the blow of those painful, lived experiences and ensures she’s always ready for whatever’s lurking around the corner. Being the weird horror chick has its benefits.

As a teen surrounded by death and uncertainty, it was my lifeline.

And, of course, there is the part of it that isn’t that deep: It was a fun game that I could actually beat, something rare for a serial game-abandoner such as myself. Its darkness was alluring in the way that spooky things tend to be — it looked cool. American McGee understood that appeal and was himself drawn in by it, which is probably why it worked so well.

“A lot of my inspiration comes from dark things,” he said in a 2001 interview with the website Game Developer. “I like dark music, dark movies, and dark fiction, so I guess the question is, why am I so infatuated with things of a dark nature? I don't know… I think that going in the dark direction was just a rebellious sort of thing on my part, but over the years it has become a big part of who I am. I just have a taste for that darker side of things.”

Revisiting Alice now, at 28 years old and with the knowledge of having survived those darkest times, slicing through the horrors again feels so good. Now, I play on Nightmare Mode.