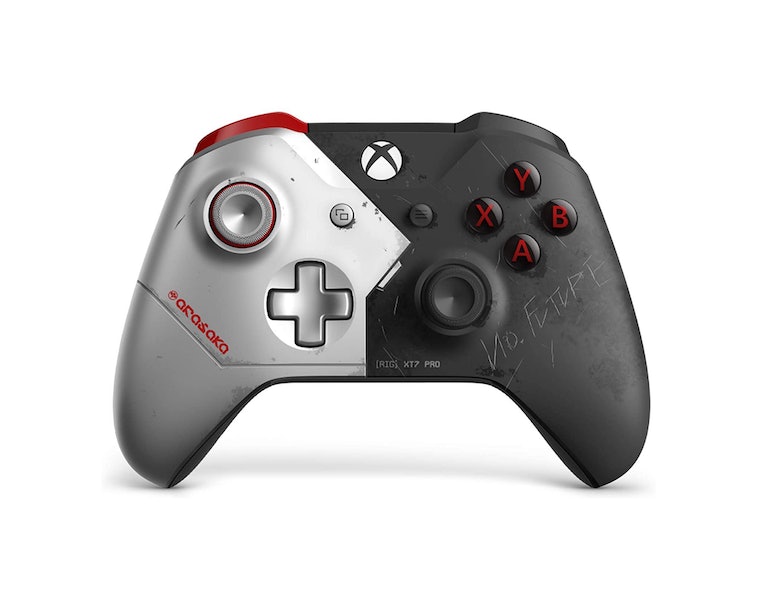 Amazon Canada has apparently leaked the first known images of a special edition Cyberpunk 2077 Xbox One controller, as first spotted by Hypebeast. The product is listed as “currently unavailable," with a supposed release date of May 4, 2020, despite its inspiration’s release date being pushed to September 17.

The dual-tone controller is matte black and metallic silver with red button highlights and an overall battle-worn look, complete with scratch marks and various dings. Scratched into the controller’s right side are the words “No Future,” while the left handle sports the game's Arasaka logo.

Amazon says the controller will help you “live the mercenary life.” It’s based on the game’s Johnny Silverhand character, who’s voiced by Keanu Reeves.

The controller hasn’t actually been announced by Microsoft, so Amazon’s release info could be incorrect. And with Microsoft’s next-gen Xbox Series X well on its way to consumers’ homes, the timing of this release would be strange, to say the least.

Cyberpunk was ahead of its time — CD Projekt Red delayed the much-anticipated Cyberpunk 2077 back in January, well before everyone else started pushing releases because of the COVID-19 pandemic. At the time, the developers spoke of extra testing and polishing that needed to be completed before the game’s release.

Series X's impact — But Cyberpunk 2077 ‘s release delay could very well be a byproduct of the near-completion of both Sony and Microsoft’s next-gen consoles, which should be available for the 2020 holiday season if all goes well. If everyone is buying up the new consoles, who is going to be playing Cyberpunk 2077 with an Xbox One controller?

To be fair, the Xbox Series X will actually be compatible with previous generations’ controllers. So some users will certainly flock to the battle-battered aesthetic of this controller when playing the new game, whether it’s on the One or the Series X.

Amazon’s detailed listing makes it pretty clear this is a real product, but Microsoft hasn’t said anything about it yet. Either way, you can’t pre-order the controller right now — but real life has plenty of dystopian twists and turns to tide us over for the time being.

UPDATE: Tom Warren at The Verge has posted some additional info that suggests Microsoft will be unveiling a Cyberpunk 2077-branded Xbox One X console and controller next week, with another user posting a packshot of the console. Both follow below.

UPDATE: Today (April 17) Microsoft released a YouTube video confirming the limited edition console, which it says will be released in June 2020. Watch the video below.