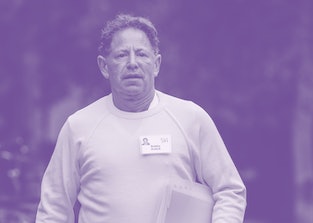 The CEO of Activision Blizzard — the company known for creating some of the most popular titles in video gaming history like Call of Duty, Diablo, Candy Crush, and World of Warcraft, and not paying any taxes in 2018 — is receiving serious scrutiny after 50 of his employees were laid off on Tuesday, Kotaku reports.

While sacked workers figure out how they will get back on their feet again during a pandemic, Bobby Kotick is set to receive a gigantic amount of money in stock bonuses to the tune of almost $200 million, according to the CtW Investment Group.

The group, which states that its mission is to hold “directors accountable for irresponsible and unethical corporate behavior and excessive executive pay,” has condemned Kotick for reaping the benefits of his workforce as it loses major job security.

Most of the workers laid off came from Activision Blizzard's support department, GameSpot notes. This group was tasked with scheduling and carrying out live events like in-person matches between gamers, which no longer take place due to the pandemic. Thus the company justified the mass layoffs as a restructuring decision in order to "adapt" to COVID-19. According to Bloomberg, a company spokesperson said, "Players are increasingly choosing to connect with our games digitally and the e-sports team, much like traditional sports, entertainment, and broadcasting industries, has had to adapt its business due to the impact the pandemic has had on live events."

It’s hot at the top — While Kotick will enjoy some $200 million in bonuses thanks to the "Shareholder Value Creation Incentive" provision in his employment agreement, the Sports Business Journal reported, laid-off workers will receive impressive severance... but it’s scant compensation by comparison. Those being laid off will get healthcare and 90 percent severance for a year, and they’ll each be given — wait for it — $200 Battle.net gift cards.

Kotick hogs all the credit — Criticizing Kotick, the director of Executive Compensation Research, Michael Varner, told the Sports Business Journal, "While the increase in Activision’s stock price is somewhat commendable, as we stated last year and continue to assert, this achievement alone does not justify such a substantial pay outcome for the CEO."

“There are many factors that may contribute to a rise in this particular company’s stock price that may not be directly attributable to Robert Kotick’s leadership,” Varner added. “The use of video games as one of the few entertainment options available amid the COVID-19 pandemic, for example, has been a boon to many companies in the gaming industry irrespective of executive talent or strategic decisions."

That’s a polite way of saying that Kotich owes this obscenely large bonus to other people’s labor.