A sealed copy of 'Super Mario Bros.' is on auction for a fortune 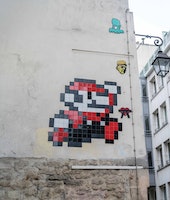 The current highest bid for the rare game cartridge.

NFTs are cool, but physical works of art will still sell for a pretty penny. A sealed copy of Super Mario Bros. for the NES is currently at auction with the bid sitting at $310,000, putting it on course to become the most expensive gaming collectible ever sold. Though considering the “buyers fee” that brings the actual cost to $372,000, by some measures it’s already cleared that bar.

The only known piece of gaming history that’s gone for more is a prototype of the Nintendo PlayStation, which sold last year for $360,000 at auction. The never-released console was a ’90s-era joint effort between the two companies that would have been capable of playing both cartridges and CD-ROMs.

More than 40.24 million copies of Super Mario Bros. have been sold worldwide since the game’s release in 1985, making it one of the best-selling games in history. The release of the NES and Super Mario Bros. arguably changed gaming by taking platformers to the next level (no pun intended) by focusing less on high scores and more on depth and exploration. The game remains an incredibly popular part of pop culture nearly 40 years later.

Rare edition — The copy at auction is a fourth edition, meaning it’s not from the original production run. But Heritage Auction says the fourth edition was produced for only a very short time. The copy being sold features a Game-Pak NES-GP code on the back, which Heritage points to as evidence of its rarity. “The nationwide release for the [NES] console came in mid to late 1986, and black box games distributed for that release did not have the ‘Game Pak NES-GP’ code.”

“It's worth mentioning that Nintendo managed to add the trademark symbol to the Nintendo Entertainment System on their game boxes by the beginning of 1987,” the auction house continues, meaning there was only a brief period between release in 1985 and mid-1986 when this edition could have been produced.

Appreciation — For most of us who can’t afford to buy this piece of history, there’s a lesson worth taking from the sale. You better get a Switch right now and leave it unsealed in your attic. Maybe 40 years from now you’ll have a nice retirement fund waiting for you.