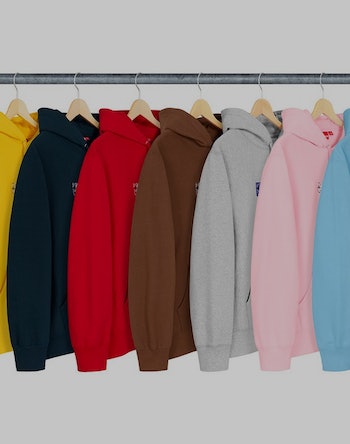 Much to the surprise of many hypebeasts, Supreme is doing two "Box Logo" drops this week. For those of you who don't know what that means, Supreme's Box Logo apparel tends to be its most exclusive — it features the streetwear brand's Futura logo inside, well, a box.

Unless Supreme is opening a new store location around the world, it only launches a Box Logo hoodie or t-shirt once a year, but this season is different. The brand just dropped a bandana-themed Box Logo hoodie last Thursday and, tomorrow, it is following that up with a t-shirt that has the same design.

Whether it's on a hoodie, t-shirt or... a literal brick, Supreme fans covet its Box Logo (BOGO). Unfortunately for you, your chances of actually getting a Bandana BOGO tee on Thursday are quite slim — and you'll probably have shopping bots to blame.

The struggle is real

Last week, during the Box Logo hoodie online drop (which always happen at 11AM ET), Supreme's site basically turned into that brick it made famous. Product pages on the site were broken and, by the time the site came back to life, every size and every color of the bandana-print hoodie were gone. It was bad enough that I'd consider it a success to simply get one in your cart, never mind being able to purchase. This isn't news for people who buy Supreme on a regular basis, but it should give you an idea of how difficult it is to buy one of these sought-after items.

Simultaneously, while hypebeasts were taking to Twitter to voice their disappointment, individuals in Discord groups were sharing screenshots of their order confirmations. I would know because I'm a member of some of them. Discord, which started as a chat app for gamers, has become home for resellers who use automated computer scripts (aka bots) to shop for limited-edition sneakers and, of course, Supreme.

If you thought buying tickets for Hamilton, or purchasing a new iPhone back in the day, was hard, Supreme Box Logo launches make those seem easy by comparison. It's the Wild West out there for hypebeasts, and the bots are winning. And even though Supreme uses Google's reCAPTCHA, a tool for spotting if a human is actually behind a computer, resellers and tech-savvy streetwear buffs have built tools that can circumvent it pretty easily.

Now, that's not to say it is impossible to buy a Supreme Box Logo if you don't have a bot — I've done it before — it's just that your odds will be exceedingly low if you try to checkout manually. Supreme doesn't share how many Box Logo hoodies or t-shirts it makes, but it's safe to assume the supply is really limited since they sell out on the site within seconds. You could always try to buy one from its stores instead, but you have to register online, which gets you a time slot to wait in line (anywhere between 1 to 2 hours) just to get in. And even when you get in, there's no guarantee there will be any Box Logos left or ones in your preferred size or color.

What sucks about not getting a Box Logo hoodie or t-shirt straight from Supreme is that you're going to have to pay a premium for them on the resale market. The sad truth is that many of these will end up on apps like StockX, where a hoodie that's priced at $168 retail can fetch for as much as $1,100.

While services such as StockX have, indeed, made exclusive apparel and sneakers more accessible, they've also created a booming resale market. This is why legacy e-commerce sites, including eBay, are adapting to the new ways people are shopping for these types of goods. eBay had to slash selling fees on sneaker sales in order to compete with StockX.

So basically, a Supreme Box Logo could be yours. You just have to be willing to pay a few hundred more dollars for over retail price. Tomorrow's Bandana BOGO tees are set to cost $40, but within minutes after they drop on Supreme.com, they'll likely be listed on StockX for anywhere from $300 to $500 dollars. So if you fail to cop a BOGO, you now who to blame for jacking up the prices: resellers and their bots.