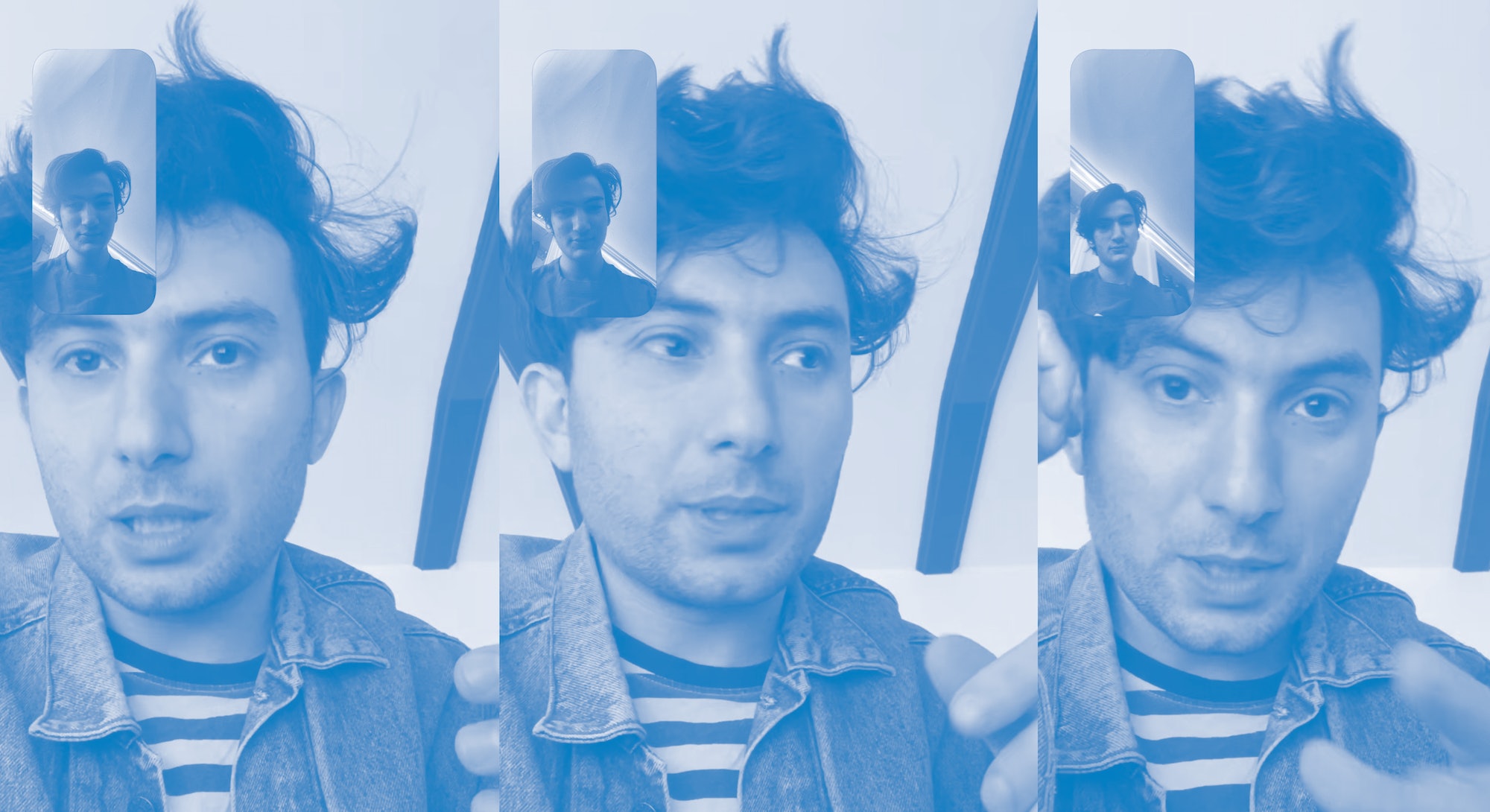 Conceptual artist Ryder Ripps, who runs the design studio OKFocus and collaborates with big-name artists like Grimes and Kanye West, is no stranger to controversy.

During the pandemic alone, he’s found himself the subject of much internet discourse. Like when he claimed he redesigned the CIA’s logo (he did not). And when he sold his audio sex tape with then-girlfriend Azealia Banks as an NFT (this was apparently real).

A month ago, Ripps, who is 34 and lives in L.A., launched a slightly less contentious project called Million Token Website along with his 16-year-old brother Ezra, an apparent coding whiz. “We were both looking for ways to take the NFT hype to the next level, looking for what was next in this space,” Ezra says.

The site is a 1,000-by-1,000-pixel digital “land” mass that anyone can buy a parcel of. Each pixel-sized “plot” costs 0.001 ETH (currently around $3). If any of this sounds vaguely familiar, that’s because the idea came from 2005’s legendary Million Dollar Homepage.

You can do almost anything you want with your land, including reselling it on the secondary market. Each plot is essentially a visual representation of the MTW blockchain, so buyers can create images. Adidas and Virgil Abloh both are advertising on the site; Billy Markus, creator of Dogecoin, has an area upon which he’s drawn — what else? — the doge itself.

A little more than a quarter of MTW’s land has already been sold, and there aren’t any plans to expand beyond the current 1,000-square-pixel area. As in the physical world, the land is finite. But the Ripps brothers are far from done with improving the MTW experience.

Input recently spoke with Ryder and Ezra about founding the site and just how serious they are about their new, and highly lucrative, digital playground.

Who came up with the idea first? Was it truly collaborative?

Ezra: It was more of a collaborative thing.

Ryder: Million Dollar Website was one of the first sites I ever saw that was really successful at being weird. Like totally different. In a way that site was lodged in my head as a rubric for how you could make something off-kilter online and also have it be successful. And for the NFT space — we wanted something more collaborative, not just a JPEG. We wanted a living, breathing community, something that’s an evolving thing, that embraces the fact that it’s just like land. Because it’s tied to NFTs, it’s almost identical to land: You can build on it, you can tear down whatever you build, you could sell it, you could sell parts of it, you could rent it. The only thing you can’t do is grow vegetables on it and sleep and live on it.

Was “land” always the starting point?

Ryder: That definitely was at the very beginning. You can tell by the photo shoots we did before we launched. We went around dry lake bed areas and remote areas of Southern California and took pictures of Ezra and just, like, the land. The idea was always to create that dialog between physical and digital land.

Ryder, I know you have a lot of website design background. Ezra, is that also true of you?

Ezra: I wouldn’t say design, but I have built many websites in the past. So all the programming was done by me.

Ezra: I mean technically, but I haven’t really gone to school in the past year or two.

Ezra: Well, last year I went maybe half the days. This year I have not attended one day.

I mean, I would choose this over school. How much work did you put into it? Was it difficult?

Ezra: I wouldn’t consider it an easy project. I wouldn’t say it’s the hardest project I’ve ever worked on. But it did take a good month of working like 10 hours a day.

Ryder: He came out to L.A., and we worked on it together.

Is there anyone else working on it? You’ve been doing all the promo?

Ryder: It’s just us right now. This is like ultimate creativity because we’re working for ourselves. We get to come up with ideas like the [Million Dollar Website] poster campaign we put around the city and actually execute them without some bureaucratic complaint like, Oh, we can’t put the big silly face of a teenager everywhere. All my commercial stuff has been client work in the past — it’s cool to work in commercial but with complete control, just my brother and I.

Would you say the site is serious? Does it toe the line?

Ryder: I like to think of it as a fun site. And as a site that opens people’s minds up in a way. It’s not serious in the sense that it’s didactic or academic, but it’s serious. I think it does give people a new perspective on ownership. But it’s also fun because it’s collaborative. It’s all unforeseen — we can’t control or predict what people will do. It’s exciting to see that evolve, both for us and for the people on the site, too. It’s definitely not a joke, but it’s also not, like, serious.

Ezra: Like, is Twitter a serious site? It goes along the same lines as that. It all depends on what the users want it to be.

Did you expect it to take off as quickly as it did? You’re like a quarter full now, right?

Ryder: A little over, yeah. I don’t personally go into projects with too many expectations. I just try my best and work hard and see where it goes. I definitely believed in it. We just wanted to do the best job possible. We’re continuing to develop on it. Like Ezra just added a feature so landowners can chat on Discord. We intend to keep evolving and adding to it. So it’s not just a matter of it was successful with the launch. To us it’s a growing thing; we’re just starting.

Matt: Do you have long-term plans for it?

Ezra: I mean, this is an NFT. We’re going to need to maintain the site for a long time. In terms of adding features for user experience, there’s definitely going to be many more months of development just to make the site better for people who already own land, since we didn’t have that time before launch.

What happens when it fills up?

Ezra: You can always edit your land, sell it on the secondary market. In a sense the site’s never going to be, like, over.

Do you think you’d ever expand the land?

Ezra: We’re not going to expand the land.

Ryder: A friend of mine was like, “It’d be cool if everyone who has land gets a bottom layer.” That was kind of interesting. Everything we do we want to do with community support, though. We’re reaching out to the community to see if there’s anything they want. That’s important to us.

Now that the NFT hype has kind of settled, do you think they’re still here to stay?

Ezra: The same amount of unique people are buying every month, even though the hype’s died down in the press. There’s still an active community purchasing. There’s always going to be people who got into Ethereum earlier, the major collectors. They’re always going to be in this community.

Ryder: It’s expanding. I think you’re gonna keep seeing more NFT stuff, with smart contracts especially, because without them it’s just not as efficient. There’s definitely a real place for privileged features through smart contracts and integrating payments. I can’t imagine it going away because it would be backward for it to go away.

Why do you think there’s so much disdain around NFTs right now? Why are people so unwilling to use them or talk about them seriously?

Ryder: When the subway was invented, people thought it was actually going to hell — like you’re going into the depths of hell, and it was an evil thing God didn’t want. Whenever there’s new technology people don’t understand, they try to explain away their emotional knee-jerk reaction of disdain. They do that through whatever means they can. Critiques like the environmental impact are things that can be addressed. The underlying tech is so useful that I can’t see it going away.

Ezra: NFTs aren’t going away any time soon. The use cases we have right now are just breaking like the one percent of what you can do with NFTs. At some point people aren’t going to be aware they’re using NFTs. I think the initial disdain comes from people not knowing how to use it being angry that they don’t understand it.

Do you think we’re using the blockchain well? Could we be using it for more interesting things?

Ryder: I think everything can always be better. Do you think we’ve made every great dish there is to make on earth? And people have been cooking for a long time. What’s really great about this time is that it’s motivating people to innovate. The web was really dominated by Google and Apple and Facebook in terms of what we thought was possible online. Now there’s all this innovation happening. That’s undeniably great for society.

How would you pitch Million Token Website to someone who’s really skeptical about it?

Ryder: I wouldn’t. I’m at a point where I don’t really argue with people who are really skeptical about something. It’s a similar pitch to cryptocurrency in general, though: Do you want to be part of this move into the future? The only reason something has value is because people agree it has value.

In terms of plots people have bought so far, do you have any favorites?

Are ads a pretty common use case for these plots?

Have you seen any pushback from the larger NFT world?

Ryder: Not that I’ve heard. But maybe in private.

Ezra: No, I haven’t seen any of that.

Ryder: I hope it’s clear, at least to most people who go on the site, that we worked really hard on this. And it’s out of a real passion for creation. We’re just trying to push the technology in a palatable way. For me, as a designer, it’s about figuring out how to make something that’s understood by, like, normal people — not just tech people.

How does Million Token Website fit into the digital art NFT market? Is it something else entirely?

Ryder: You can definitely make art on it. And you can definitely sell that art. There aren’t any rules against selling, like, a screenshot of your plot as an NFT. There are just so many uses of that land. You could sell editions of your work and then display the original on Million Token. That’s the whole thing — we’re letting other people figure it out, now that it’s built. We’re trying to support this as a platform for innovation.