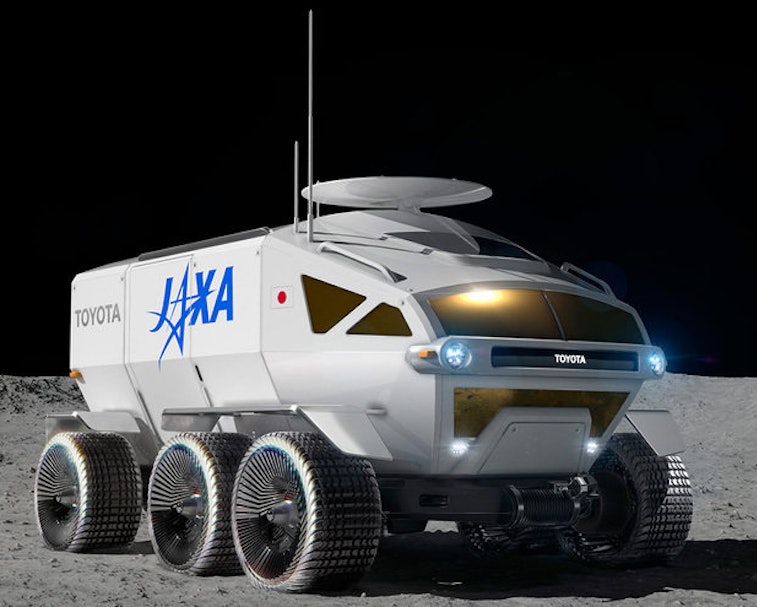 Ahead of any sort of actual colonization of our solar system beyond our own planet Toyota has taken it upon itself to create a vehicle capable of navigating extraterrestrial surfaces. The lunar surface, to be exact. The Japanese automaker has just shown off the aptly named Lunar Cruiser, a manned rover made in collaboration with the Japan Exploration Agency (JAXA), the Japanese equivalent of NASA.

The Lunar Cruiser is the result of more than a year of collaborative research between the carmaker and the Japanese agency. Together they’re working to manufacture test parts and construct a fully functional prototype by the end of this fiscal year. Which is one way to cleave through the leftover R&D budget.

This week’s announcement was mostly made in order to announce the vehicle’s name, which is a reference to Toyota’s beloved Land Cruiser SUV. Toyota says it decided to go with Lunar Cruiser “because of the familiar feeling it offers to the people involved in the development and manufacture of the vehicle prototype … as well as the familiarity it will provide to the general public.”

Toyota’s first space-capable vehicle is an absolute beast, with every precaution taken to ensure not just usability but long-term reliability. Because a breakdown on the moon would be a little more than just inconvenient. On the upside, despite being such a huge vehicle, parking it will be a dream considering there'll be nothing to crash into.

More than 6,000 miles — The Lunar Cruiser will not have the minimal form factor of Toyota’s Prius or the armored military feel of Tesla’s Cybertruck. And for good reason — it packs much more of a punch than those vehicles ever could.

The Lunar Cruiser is set to pack an absolutely unheard-of number of driving miles in its 20-foot long body. According to Toyota, the vehicle will use a combination of hydrogen fuel cells — lots of them, as pictured above — and an enormous solar panel to take drivers up to 6,200 miles. That’s enough fuel to get you from Los Angeles to New York City — and back — on a single recharge.

Only the beginning — As if creating a behemoth lunar rover wasn’t enough work, Toyota’s partnership with JAXA is looking to extend beyond vehicles. The company said in its naming announcement this week that the two organizations have been having discussions with a range of industries under the theme of "a lunar society pioneered by the manned pressurized rover.”

This doesn’t mean Toyota will be colonizing the moon any time soon. Rather, the company hopes the Lunar Cruiser concept will inspire dreams of a full-fledged society brought to life by the vehicle’s exploratory powers. And Toyota’s rover might have the power to actually evolve our space-exploration practices, given how impractical most space vehicles are for long-term surface missions.

The Lunar Cruiser is expected to launch in 2029 if all goes according to plan. By the look of it, the vehicle will be much more moon-ready than a converted Cybertruck would be. Now there's just the tricky business of actually building it and getting it to the lunar surface.