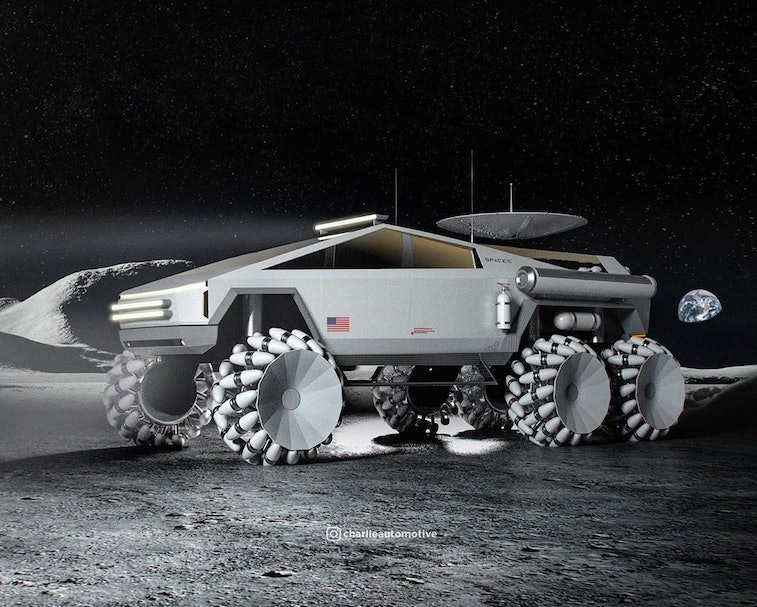 Tesla's Cybertruck is a cool, albeit controversial, car. Love it or hate it, it's hard to deny that the Cybertruck is a car that actually looks different in a world of cars that mostly look the same. Some might say it looks otherworldly. Now, as the two company Elon Musk heads, Tesla and SpaceX, ramp up their partnerships, a designer has mocked up renders of what a moon- or Mars-roving Cybertruck might look like.

Fighting the laws of non-gravity — As you'd expect from a car intended for another plant, the Lunar Cybertruck or Tesla Moonrover or whatever Instagram user Charlie Automotiv who did the mockups wants to call it, it's a wild design. Though as a commenter over on Electrek — which first reported on the concept vehicle — notes, some of the design cues here incorporate real concerns regarding space — the standard rubber wheels on a Cybertruck, for instance, would need to be replaced by metal in space because rubber would get too cold and turn brittle.

Also, an internal combustion engine is no use unless there's oxygen for the combustion part to happen, so an electric-powered vehicle makes more sense. Elon Musk has even joked that he'll produce a pressurized version of Tesla's truck for space that'll be the "official truck of Mars." But a Space Cybertruck would likely need to be much larger in order to incorporate an airlock, and those doors might not be practical for getting in and out in a spacesuit.

Martian motoring — Despite his frequent head-scratch-prompting comments and behavior, Musk is a smart cookie when it comes to engineering challenges. You can bet he knows the Cybertruck in its current form won't be appropriate on the moon, or on Mars. But at least he's also shown he understands space hardware can be both functional and cool: Just look at the pretty great-looking spacesuits SpaceX made for its recent manned mission to the International Space Station. There's no way Musk would send something into space that looks as dorky as the Apollo 15 Lunar Rover Moon Buggy.

Tesla's refreshing automotive designs have inspired other fan renders and alterations, including an unfortunate Cybertruck camper van concept, a divisive and wildly expensive Model S station wagon conversion, and the wonderful Truckla. The lunar Cybertruck is the wildest of the lot... and the only one with six wheels. We're instant fans.

There's no doubt Musk plans to take humans to Mars. When we get there, we're going to need a ride to get around and explore it. We don't know what a Martian buggy will look like, but this is definitely one small step in the right direction.