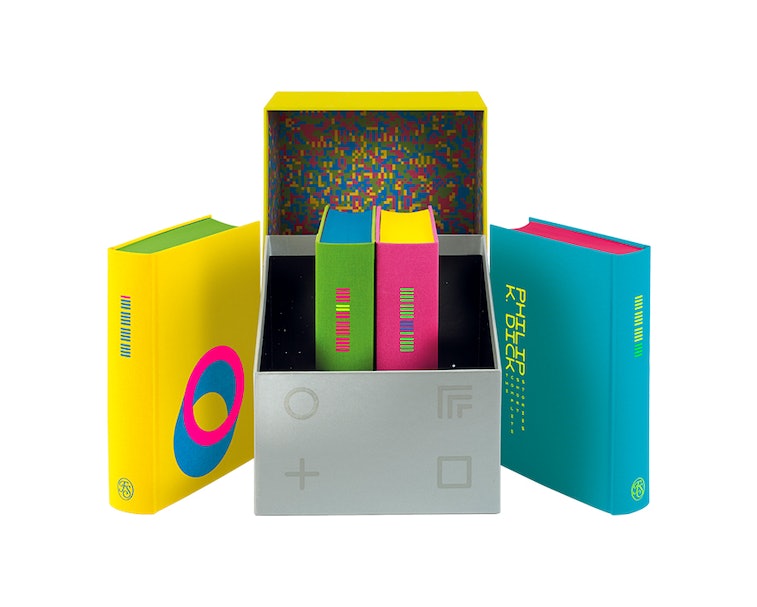 The late Philip K. Dick's contributions to science fiction ran the full gamut of themes, from the nature of reality, how memory works, the pleasures and perils of drug use, and the complexity of human relationships, to how identity works, the risks of governments with unlimited power, and other dystopian ideas. Now, maker of collectible books The Folio Society has released a luminous, four-volume boxed set of Dick's short stories in a beautiful, but very limited edition. Priced at $745 in Folio’s U.S. store (or £495 in its U.K. one), this set is for hardcore fans and collectors only.

The Folio Society's collection offers all 118 of the author's short fiction pieces, along with 24 illustrations for the set contributed by 24 different artists. There are only 750 copies of the entire collection and it's already sold out, which suggests if you really want it, you’re going to have to pay more even than retail.

One man and his striking imagination — According to The Folio Society, Dick's estate contacted the organization with the concept of a consolidated collection of his short fiction work in one place. “Following The Folio Society’s publication of some of Philip K. Dick’s most celebrated novels, including The Man in the High Castle, Ubik, A Scanner Darkly, and Do Androids Dream of Electric Sheep?, the author’s estate approached the team with a new idea — an edition of all 118 pieces of short fiction.”

Dick’s most famous work is probably Do Androids Dream of Electric Sheep?, the novel which became the film Blade Runner. But plenty of his short stories formed the basis of films, too, including Total Recall, Minority Report, and The Adjustment Bureau.

Purchasers of the collection can look forward to receiving the La Boca studio-designed set which is clad in bright and lively fluorescent inks. The illustrations for the 2,650-page set were printed on Arctic Volume Ivory paper, which is known for its refined quality, and the book covers come in neon pink, green, teal blue, and deep yellow. There are also ribbon markers for each volume, and the set arrives in a box with colorful illustrations on its interior and a dazzle pattern on its lid.

Clairvoyant design — The Verge points out a novel design element in the Folio set: the symbols on the books resembled those on Zener cards. If you're not familiar with them, Zener designs were used to “assess” extrasensory perception — or “mind-reading abilities” — by psychologist Karl Zener. Given that mind reading and telepathy are prevalent themes in Dick's fictional worlds, this thematic tie-in is no accident.

“Dick struggled to achieve mainstream success — his non-science-ﬁction novels being returned by his agent in 1963 — but received enormous acclaim in the science-ﬁction world for his works exploring metaphysics, theology and politics,” Folio notes. Much of that acclaim only came after his death, and sadly he didn’t even get to see Blade Runner, as it was only released four months after his demise. Nonetheless, collections like Folio’s ensure his legacy will live on for a long time to come.