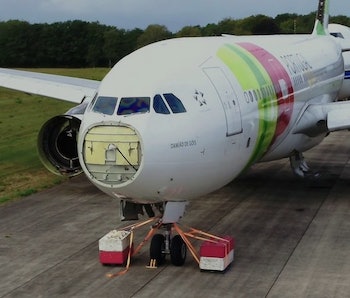 Have you ever wondered what happens to massive commercial airplanes like Boeing's 737 when they reach their end-of-life and get taken out of service? All that stuff has to go somewhere, after all. The first place is pretty predictable: The aircraft industry buys up parts that are still good. But sometimes, parts are also sold to everyday people.

Where planes go to die — Design magazine Core77 has a new profile out on the company Aircraft End-of-Life Solutions (AELS), an aircraft recycling company that rips apart decommissioned planes and sells off the pieces. Its founder Derk-Jan van Heerden started his career working in maintenance at Dutch airline KLM, where his experience disassembling 737s inspired him to start his own business doing it for others.

Airplane aesthetic — Apparently, selling airplane parts to regular people only came about after AELS began hearing from people who wanted the parts as home decor. The company now holds auctions open to anyone where it sells wheels, lights, landing gears, ovens, coffeemakers, and a whole bunch more. I mean c'mon, what self-respecting college student wouldn't want this electric airplane oven in their dorm room:

People have even gotten creative with their use of the parts, according to AELS. Like one person who took an engine fan and turned it into the underside of a coffee table:

Or maybe you'd like to use a window as a picture frame:

If you're interested in copping yourself some gear to give your home that airplane-inspired aesthetic, AELS has a mailing list where you can sign up to stay informed on upcoming auctions. If you actually work in aviation, the company also has a running list of their existing parts inventory.

And just for pure entertainment, here's a video AELS released of one of its employees activating an aircraft emergency slide:

It's a pretty impressive engineering feat, how quickly that massive slide can expand out of such a small package.