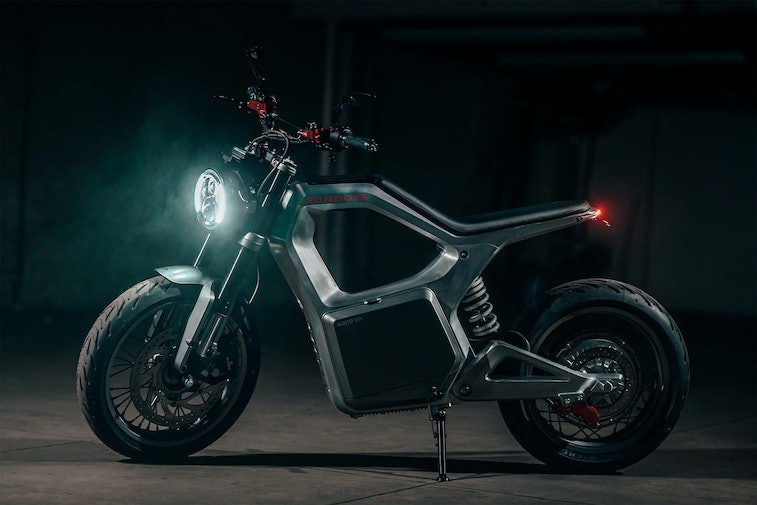 Sondors, the e-bike manufacturer that's made a name for itself designing some slick bikes and mopeds at affordable prices, is releasing a new electric motorcycle called the Metacycle.

The bike is made of lightweight aluminum and weighs just 200 pounds. Sondors says its small footprint means the bike can reach speeds up to 80 miles per hour on its single hub motor, and get a similar 80 miles of range out of its 4-kilowatt-hour battery. The even more pleasing part? The Metacycle is priced at just $5,000.

Urban cool — It's not the fastest electric bike, nor does it have the longest range, but that price will no doubt make it attractive for commuters who want an around-town cruiser. Sondors says that the Metacycle can access public charging stations using a connector accessory, meaning you can charge up while you go shopping, and the battery is swappable. The bike will be even more useful when life, you know, goes back to normal and people actually start commuting places again.

The design is pretty slick, too, if you're into clean lines and minimalism. Another cool touch is that there's a built-in wireless charger for your phone under a translucent panel where the fuel tank on a regular bike would be.

Motorcycles have lagged automobiles in transitioning to electric, but that seems to be changing as major names like Harley-Davidson pour more energy into the market, and upstart brands like BlackTea enter the space with increasingly affordable options. Electric bikes are appealing for their quiet ride and small environmental footprint. They're also far simpler in construction, which enables new possibilities. There's no complicated gas tank, gearbox, or clutch, meaning designers have more room to express themselves... and they're easier to maintain.

Gaining momentum — Governments around the globe intend to outright ban the sale of gas vehicles over the next 15 years, which is motivating legacy vehicle makers to get their butts into gear and electrify their vehicle lineups. Support of clean energy from the incoming Biden administration could lead to further subsidies and incentives to adopt electric vehicles.

Pre-orders for the Metacycle are live on Sondors' website with shipments estimated to begin towards the end of the year.