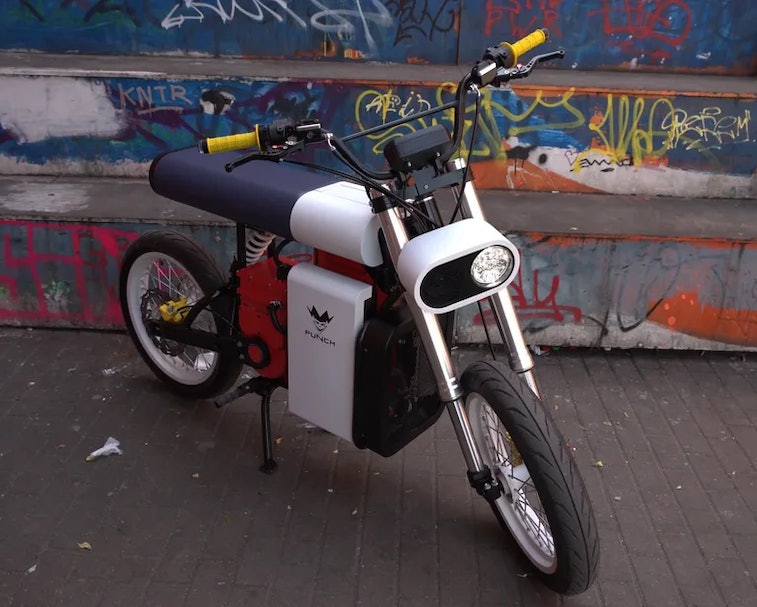 Today in the highly-aesthetic-electric-motorcycle category we have the Punch Moto, from Punch Motorcycles. It's certainly eye-catching in a way that reminds me of the Cake Kalk&'s clean lines, but with a more rugged, almost modularized look. Just don't call it a rideable vape.

The motor powering the bike, which was apparently custom-designed, has 20 kW of power in "overboost mode" and 15kW nominally, which translates to a top speed of about 83 mph. According to the company's Facebook page, the bike comes with two removable 2.5 kWh batteries that will take you 68 miles (or 110 km) or according to Electrek, and that does actually seem plausible. But, in the video posted on Punch Motorcycle's Facebook page (below), the rider picks up the battery a little too easily for me to believe that the ones we're seeing are actually 2.5 kWh, as they would be quite heavy.

Coming back to the design for a moment, I did the "white guy blinking" face when I read a quote from Punch Motorcycles to New Atlas designating it as "suprematist" design. Considering the current political climate, I'm not sure how loudly I would be throwing that word around, but apparently "suprematism" was a Russian art movement in the 1920s. Here's how The Art Story summarizes it:

Suprematism, the invention of Russian artist Kazimir Malevich, was one of the earliest and most radical developments in abstract art. Its name derived from Malevich's belief that Suprematist art would be superior to all the art of the past, and that it would lead to the "supremacy of pure feeling or perception in the pictorial arts." [...] He believed that there were only delicate links between words or signs and the objects they denote, and from this he saw the possibilities for a totally abstract art. And just as the poets and literary critics were interested in what constituted literature, Malevich came to be intrigued by the search for art's barest essentials. It was a radical and experimental project that at times came close to a strange mysticism. Although the Communist authorities later attacked the movement, its influence was pervasive in Russia in the early 1920s, and it was important in shaping Constructivism, just as it has been in inspiring abstract art to this day.

Again... dubious language, but let's just assume that this was some art-world nonsense at the time, and that this quote to New Atlas is some design-world nonsense from the present. Looking at examples of the visual style in question (below), I see what they're saying.

There are no price or availability details. Given all the videos and pictures, though, I'm reasonably sure that this bike is real and functions, but there's no guarantee that this isn't functionally vaporware like the Trefecta that appeared in Westworld. Regardless, it's always great to see more abstract interpretations of the classic motorcycle silhouette, especially considering that Punch Motorcycles hails from Minsk, Belarus, which apparently made huge hogs for the Soviet Union that had a resurgence in Vietnam? The more you know.