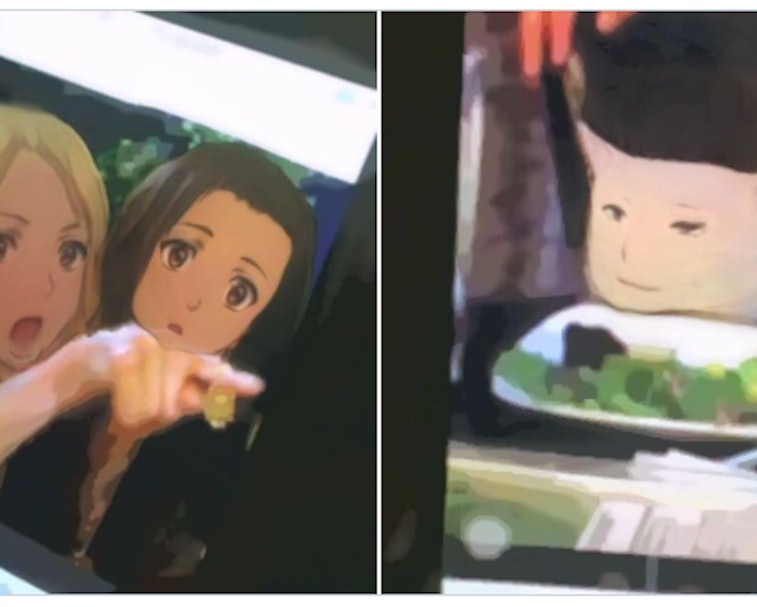 If you’ve spent more than a few minutes on Twitter or Instagram in the past few days, you’ve seen it at work: a filter that renders your face in the style of Japanese anime in real-time. The trend has taken off to such an extent that a dedicated hashtag for the filter — #animefilter — started trending on Twitter this week. Some of the posts have racked up thousands of likes and retweets.

Seeing the wild renderings across our feeds, we ran to the first place we always look for trending filters: Instagram. But the anime filter was nowhere to be found. A quick Google search proved our assumptions false. The coveted filter is actually housed on Snapchat.

Maybe we’re out of the loop, but we kind of forgot Snapchat existed amid, well, everything else. But the ephemeral picture-messaging service is far from jumping the shark — it still boasts an impressive 238 million daily active users, up 17 percent from last year.

We needed this right now — The anime AR filter is perfect for a wide variety of reasons, not the least of which is that we can all use as much levity as possible right now. Unlike some filters, which tend toward abstract aesthetics or the blatantly surreal, the anime filter is immediately recognizable and whimsical.

Of course, the filter can be dangerous when left in the wrong hands. It does seem to work on some dogs, but, uh, maybe it would be better if it didn’t.

A pioneer in AR — Though Instagram and Facebook have both found success in implementing augmented reality filters, Snapchat was really the first to introduce the idea to the general public.

Snapchat bought a Ukrainian startup called Looksery, one of the first creators of facial modification in real-time, back in 2015 for $150 million. That investment has been more than worth it, given how Snapchat’s AR Lenses have since blossomed.

And AR is once again bringing lapsed users back to Snapchat. It’s worth the app download alone if it means turning yourself into an anime character.

A memed meme — As with most trends, the anime filter has already been utilized as an evolutionary measure for existing memes. We’re grateful that Snapchat has made it so very easy to do so.

We didn’t expect to be saying this in 2020, but: thank you, Snapchat, for giving us a cute distraction. Now if you’ll excuse us, it’s time to get back to the dystopia we call reality.