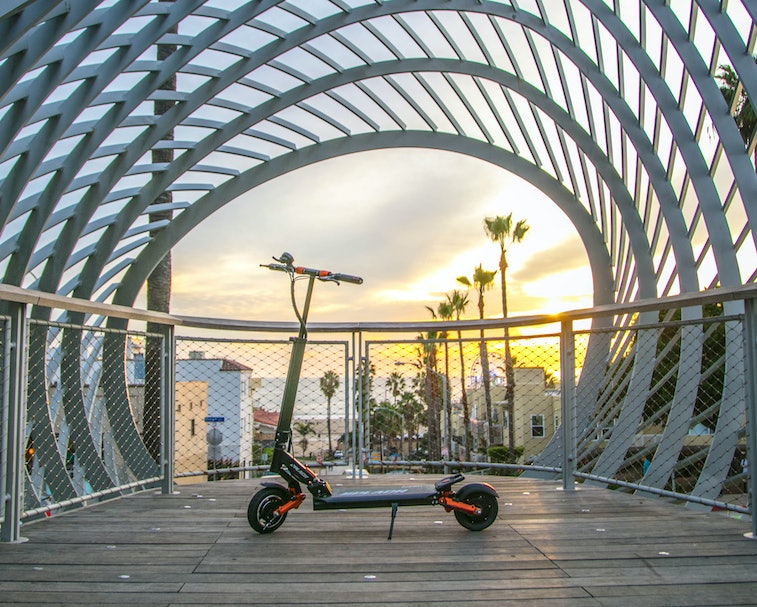 E-scooters have the potential to upend last-mile commuting, but to do so, they need to achieve mass-market adoption. One of the challenges they face is the comfort of the ride they offer, especially on uneven surfaces like, say, New York streets. Splach (like e-skateboard maker Hunter) believes the solution lies in suspension. Not of disbelief, but actual suspension. The springy, bouncy sort you'd find in a motocross bike... or a pogo stick.

The California-based company launched a crowd-funding campaign for its suspension-packing e-scooter back in May 2020, and blasted past its fundraising target with ease. To date, Splach has raised over $600,000, and that number continues to climb. With the first shipments due to go out next month, there's still a little time to get in on this spring-loaded bandwagon before the full-scale pricing kicks in.

In either instance, that's a respectable range, at a market-related price. Both devices include a built-in LCD display, a collapsible design, and a weight of ~39 lbs, which is on the heavy side, but not on the unmanageably heavy side. And both, of course, include the adjustable front- and rear-suspension the company is hoping will set it apart in an increasingly crowded market.

Softening the blows — Splach uses an 8.5-inch pneumatic tire up front, and an 8-inch solid tire at the rear which, along with the suspension, should make for a far smoother ride than most other suspension-less and solid-tire e-scooters out there (which is most of them). While we'll reserve judgment until we've actually tried it, having ridden both solid- and pneumatic-tire e-scooters, we can attest to the advantages of the latter.

If you can't make a tire larger the least you can do is fill it with air and add suspension. Conventional, solid-tired e-scooters tend to ensure the rider feels every crack in the pavement directly in their lower back until they learn to habitually bend their knees. While that's fine for short rides, it's not great for longer commutes, or when there's suddenly a new pothole on a regular route that takes you by surprise.

Safety third — In addition to the suspension and impressive range, Splach's scooters have built-in LED lighting, an NFC-based locking system to reduce the risk of theft, front and rear drum brakes (sadly, no discs here), and double charging ports to cut the refilling time from six hours down to three, assuming you spring for the optional rapid-charging kit.

We still wouldn't ride one in the rain, but we would ride it on terrain we'd normall be too scared to. Or straight-legged on New York streets which, frankly, would in and of itself be a substantial improvement to our current scooter experiences.