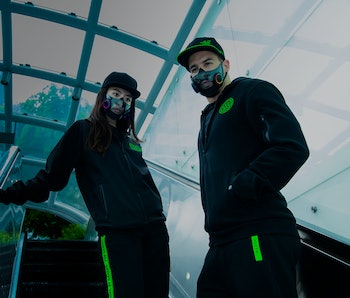 If you’d told us six months ago that we’d actually see Razer’s Project Hazel maximalist cyberpunk “wearable air purifier” become a reality, we’d have been a little surprised for multiple reasons — First, it’s such an outlandish, over-the-top idea from a company known more for outlandish, over-the-top computers and related accessories more than, say, medical-grade equipment. Second, we had hoped that we’d be on the other side of this whole “pandemic” thing by now, but... well, yeah, Florida.

And so, here we are: battening down our hatches yet again and signing up to be part of the community beta test for the Razer Zephyr, the recently unveiled official name for the company’s upcoming face mask. “Designed to be safe, social and sustainable, Razer Zephyr sports 99% BFE, a secure silicon face seal and anti-fog coating,” reads the company’s announcement tweet. The Razer Zephyr also appears to have had a bit of a design overhaul since we last saw concept images, with a more intense grill now.

Wireless charging — When released, the Zephyr will purportedly also include a sleek wireless charging case with a built-in UV sterilizer to kill bacteria and viruses while powering back up. Additionally, Razer boasts adjustable ear loops, along with an option to have the mask “custom-made to fit your face shape.”

We still don’t have a more concrete release window than Q4 2021, or a price point, but given all of Zephyr’s bells and whistles — including those two RGB lighting flourishes — we assume it’ll be a bit pricier than your average N95 mask.

Plenty of other ridiculous options out there — Don’t worry, there are plenty of other over-the-top face masks already on the market to tide you over until Razer’s Zephyr gets a wide release. Recently, Will.i.am and Honeywell unveiled their similarly cyberpunk-y Xupermask collaboration, which also features air filters, lights, and even earbuds.

And while there are no RGB lights involved with Nike’s newest Venturer mask, it definitely makes you look more like The Dark Knight Rises’ Bane than most other options.

For those of you looking for less ostentatious masks to weather the latest COVID-19 wave, we can point you to a few that are both comfortable and affordable (for the most part).