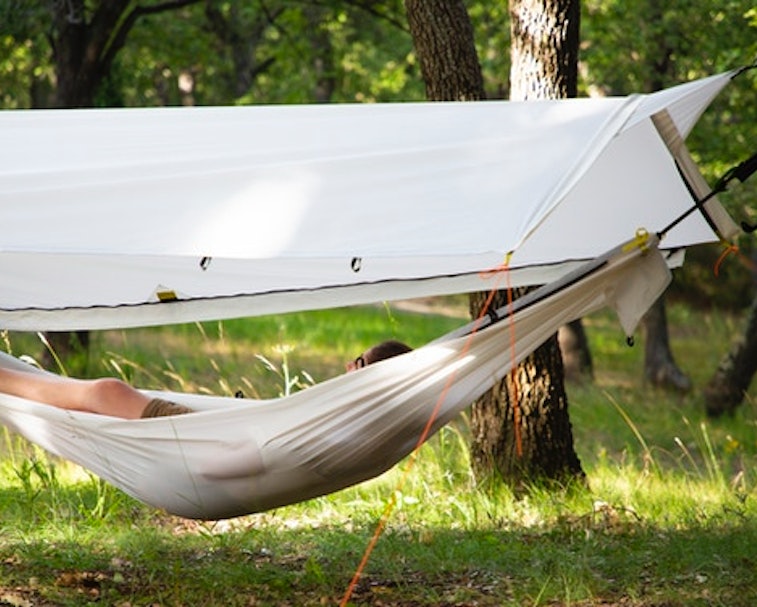 Camping is hot right now, and there are an almost unlimited number of tents out there. Do you need an ultralight tent, like the extremely popular Nemo Hornet? Or maybe something a little bigger like the REI Grand Hut? It turns out that choosing the right tent is actually not that easy, and a French company called Qaou Outdoor has taken notice.

The company is lauching the Beluga tent, a modular, 3-in-1 or 6-in-1 tent made out of recycled water bottles. The Beluga can be fashioned into two hammocks, a hammock with an overhead tarp, a sun shelter, a tent, or a tent with an awning. The idea with the tent's modularity is that you can leave some parts behind to drop some weight. Only planning on using the hammocks? Leave some of the other parts behind. You could even split the weight and size between you and a hiking partner. Or, sometimes you'll want to stop for the night in a place that's too rocky for a tent, but perfect for a hammock, or vice versa.

The question, though, is whether or not this is a good tent. As stated at the top, there are a lot of tents out there. To start off, the Beluga is a two-person "freestanding" tent, meaning that it comes with aluminum ribs that hold the tent up, and this is the type of tent most people are familiar with. Non-freestanding tents, which use trekking poles to prop up the tent, are favored by long-distance backpackers because they're much lighter and much smaller in the pack. But for a freestanding tent from a new-ish company, the Beluga's 4 lb, 3 oz weight is actually fairly decent. REI's Trail Hut 2 is a little bit heavier at 4 lbs and 14 oz, though it includes a footprint.

What makes for a great tent isn't just the weight, though. There are many small details that make a big difference when you come into camp, and we just won't know whether the Beluga stands up to the discerning standards of avid campers until it's out there in the market.

But I do like Qaou's thesis here: there are times when I absolutely do want a hammock instead of a full tent, and it would be cool to have a system that can do both. Plus, at around $224 for the 6-in-1 version, it's not much more expensive than REI's more affordable tents in similar weight categories. Plus, the Beluga is made out of completely recycled plastic, and the company's Kickstarter page isn't wrong; dying fabric does use a ton of water. This might be one of the few times that a company touting "sustainability" isn't just greenwashing.