“You have to be able to visualize the future.” 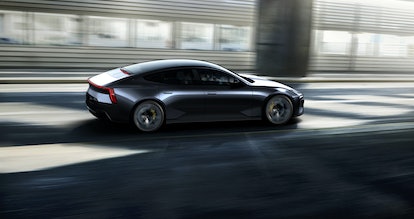 Volvo EV sub-brand Polestar has, in just a few years’ time, proven itself more than capable of creating some of the most forward-thinking electric vehicle concepts around. The company’s YouTube documentary series “Polestar Precept” provides a peek behind the curtain at how, exactly, its team manages to take budding ideas and turn them into drivable vehicles.

The latest episode of the series follows Nahum Escobedo, Polestar’s Exterior Design Manager, as he works toward a production-ready version of the Polestar 5. He speaks to his various inspirations — the shape of sharks, in particular, influenced his work on the Polestar 5 — and the company’s overall creative process.

The video’s focus is Escobedo’s design process, but his explication also affords a nice view of the Polestar 5, the company’s most future-forward sedan yet. It’s an evolution of the Precept concept the company revealed in early 2020. Polestar describes the 5’s design as “increasingly independent and muscular,” which is some classic automotive marketing speak, but we understand the “muscular” part. The car is no shrinking violet.

As free of influence as possible — Listening to Nahum Escobedo speak about his car-designing process is dreamy. His commitment to Polestar’s defiant design goals is palpable. Being afforded such an inside look is rare in the auto industry; it almost feels like we’re privy to secrets we shouldn’t have been told.

One of Escobedo’s main design principles, he explains, is starting from a blank slate. He doesn’t look to other cars for inspiration; he instead turns to other sources of inspiration, like the design of radios, cameras, and airplanes. In the case of the Polestar 5, he found the shark’s body to be of the most useful influence. Its potential for simultaneous speed and elegance really spoke to the direction Escobedo hoped to take.

Watch out, Elon — The Polestar 5 looks to be an absolute beast of an electric vehicle. The general Precept concept is still very much underpinning the 5’s design, and it will be made of the same sustainable materials and practices the Precept is. Polestar promises more info on those credentials will be offered in future episodes of the YouTube documentary series.

Polestar is still very much a new company. It’s only released two actual vehicles for consumers so far — the Polestar 1 (2017) and the Polestar 2 (2019) — and neither has managed to steal Tesla’s EV thunder in any significant way.

But Polestar is in it for the long haul, as evidenced by all the planning that’s already gone into the Polestar 5. The Polestar 3 isn’t even scheduled for release until 2022. Polestar doesn’t want to be Tesla, though, as evidenced by its design process. Its dedication to forging its own path is enough to set it apart from much of the competition. But with more carmakers entering the EV fray by the day, it may want to expedite its timelines, or accept always being a niche player. Perhaps it’s fine with that, though. We get the impression it might well be.