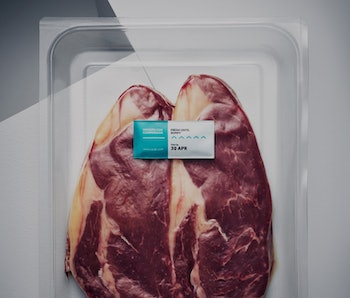 Industrial designer Solveiga Pakštaitė has developed smart food labels dubbed Mimica Touch, which can help consumers and retailers understand whether or not food is fresh, Designboom reports. When you first read that sentence, your mind most probably goes to the conventional expiry dates printed on the packages for edible items and drinks. But because those err on the side of caution, they're woefully inadequate and massively inaccurate.

With Mimica Touch, you get to understand the actual date for your food's expiry through an interactive cap or label you touch, meaning it's accessible to visually impaired people as well. Mimica Touch works by remaining smooth as a label or cap if the food is still safe to eat. But it becomes bumpy because of a bio-responsive gel embedded inside the cap or label when the contents are no longer safe to consume.

Keeping it simple — The design is uncomplicated: plastered onto the item, Mimica Touch reads like any other label except it's much more accurate and it helps tackles the enormous problem of food waste. As its manufacturer notes, 60 percent of perfectly good to eat food goes to waste in the United Kingdom because of labels stating premature expiry dates.

More often than not, these labels offer the expiry date for the worst-case scenario. Mimica Touch gives a better reading of an item's freshness by analyzing its temperature on the spot. And it's not just a pipedream — it's already being used for dairy and meat products in the United Kingdom.

Battle food scarcity — "In the United Kingdom," Mimica Touch's website reads, "[W]e throw away 7 million tonnes of food and drink annually, costing the average United Kingdom household £470 [almost $610] a year. Mimica Touch is designed to tell you if your food is still fresh, so you can save more and waste less."

In the United States, the problem is far worse. Recent research suggests that the country's food waste was as high as 40.7 million tons in 2017 alone. To put that in perspective, that weighs about 180,000 Statue of Liberties. Other reports indicate that Americans waste nearly 150,000 tons of edible food daily. Researchers often point to date labels causing confusion among consumers as one of the reasons for the issue.

It comes down to a lack of clear indication around the freshness of these items. Additionally, laws for these labels vary state by state, so there is little cohesion between retailers, state governments, and the average consumer. It's a hot mess. If Mimica Touch can win states and retail chains over along with federal authorities, food freshness could get a desperately needed makeover, and we could all stop throwing perfectly good food away.