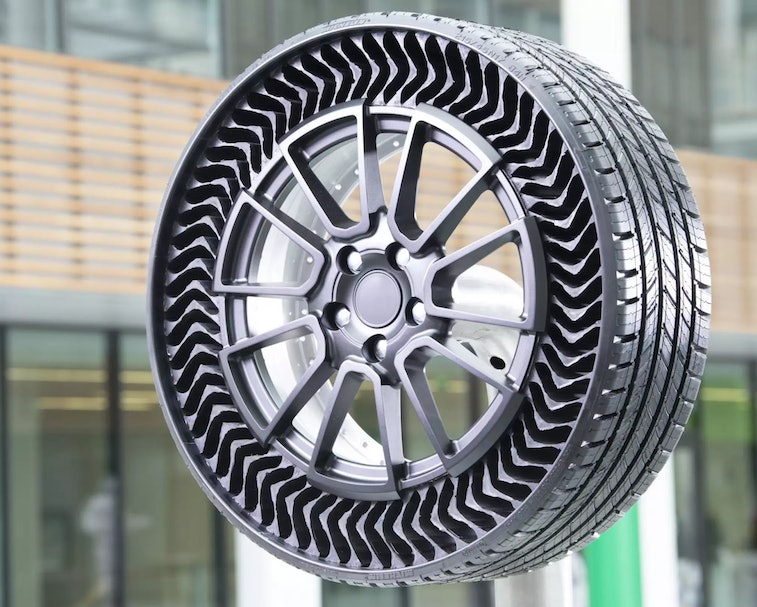 They say that you shouldn’t waste time reinventing the wheel — don’t fix what ain’t broken, right? But that’s exactly what Michelin is trying to do. The major manufacturer of automobile tires has for over a decade been working to create airless tires, which it believes could last longer and offer significant environmental benefits to boot.

New Atlas earlier reported on Michelin’s Uptis, which it recently demoed for the public at an event in Munich, Germany. In lieu of air pressure, the tire essentially uses a series of spokes to give it firmness. This is beneficial because you can poke a hole in the tread and the tire won’t deflate. The internal spokes can even be tuned to a specific stiffness to optimize for desired characteristics like acceleration and braking.

No more flats — Because you don’t have to worry about tire punctures or underinflation that leads to early wear, Michelin says that the Uptis could last up to three times as long as a regular tire. More than 200 million tires head to the scrapyard every year due to these issues, according to the company. Hopefully the longer lifespan won’t mean Michelin charges more for them. Tires are already expensive enough, and environmental messaging won’t be enough for many to buy them if they cost significantly more than conventional tires.

TBD — That all sounds great, but it’s been more than 16 years since Michelin first showed off the concept for an airless tire. Clearly it’s not been easy to perfect, and there have been questions raised about how dirt and other debris might collect inside the tire’s cavities and cause balance issues. Michelin has at least said that holes can be poked into the tread to let water escape.

Following a test drive of a vehicle using Uptis tires, members of the public reported that the experience was comparable to driving on a regular set of tires. That’s of course the point: to bring a new and improved tire to market without affecting the user experience.

Michelin appears to believe that it’s finally approaching production standards with the Uptis, and it has partnered with GM to design and start selling an airless tire for passenger vehicles “as early as 2024.” The two companies are working with regulators on government approvals for the design. It can’t come soon enough if airless tires mean no more getting stranded on the side of the highway.