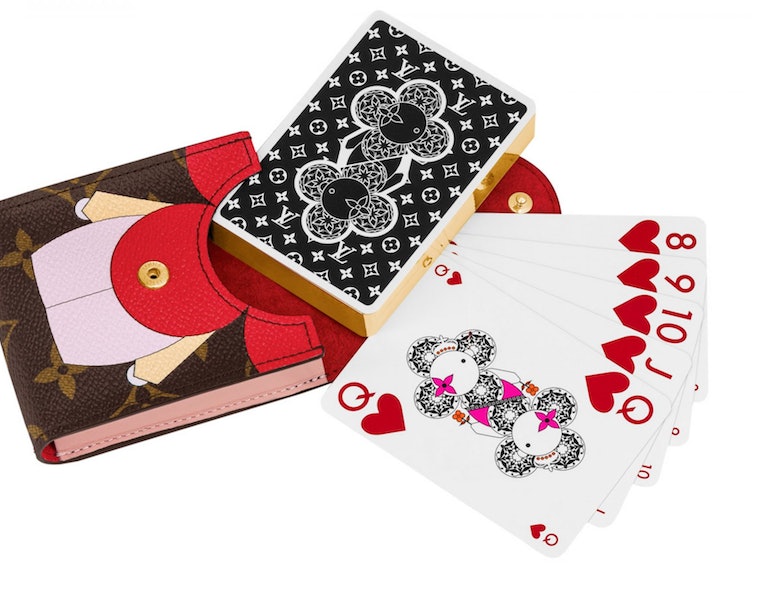 Carhartt WIP isn't the only brand taking a page out of Supreme's book and launching a range of fashionable accessories. Here comes Louis Vuitton. First things first: Supreme most definitely didn't invent the space, but when it comes to superfluous items — like a brick or an Oreo with a box logo — not many come close to matching the buzz of the streetwear giant's odd creations. If anyone has a chance, though, it's going to be LV. The luxury house has just dropped a collection of games, sporting goods and collector items that will draw the attention of hypebeasts (and soccer moms) everywhere — especially now that people are forced to stay home due to the COVID-19 global pandemic.

Something for everyone — This capsule includes playing cards, dice, dumbbells, a jump rope, a vinyl holder, a music box, a cocktail shaker, a paperweight, a cigar case, a cocktail shaker, and more. Each item, naturally, dons Louis Vuitton's famous Monogram Eclipse canvas with "LV" logos throughout, design cues that instantly make all of these accessories the ultimate status symbol. If you have to stay home and exercise there, in order to stop the spread of coronavirus, why not do it with dumbbells that cost $2,720?

Speaking of which, pricing on these items vary depending on what you're looking to get. But you already know none of them are going to be cheap. For example, the Louis Vuitton playing cards and their companion leather pouch start at $500 (there's another for $680), while the jump rope, ping pong set, vinyl holder, and music box are $670, $2,280, $1,100, and $3,450, respectively. That may seem expensive to many people — particularly at a time when the economy is in shambles — but those who have purchased anything from LV before won't be shocked in the least.

The Virgil effect — Ever since Virgil Abloh took over as Artistic Director for Louis Vuitton in 2018, the brand has added more streetwear influences to its seasonal capsules. Abloh is the founder of Off-White and, for years, he was Kanye West's creative director, working on clothing, music, and art projects such as Yeezy and My Beautiful Dark Twisted Fantasy. He's also responsible for some of Nike's most coveted collabs in recent years, like the Off-White Air Jordan V that was introduced at NBA All-Star Weekend in February.

Louis Vuitton's new games, sporting goods, and collector items follow the release of a flashy home goods collection in 2019, which included the Monogram Tower, a colorful, luxurious take on the Hasbro's popular Jenga game. Not surprisingly, that Monogram Tower sold out immediately, even though it was $3,050.