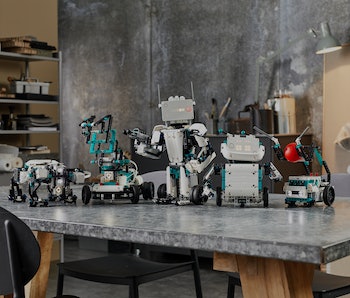 Lego has announced a new Mindstorms Robot Inventor kit (its first in seven years) that teaches children how to build and design robots. The kit includes 949 pieces and instructions for five designs, though the pieces can also be used to build whatever sort of robot your heart desires. Using the Robot Inventor app, the robots can be programmed to do things like sense the area around them and fire darts. The kit includes sensors for recognizing surroundings, color, and position, along with a lithium-ion battery, speaker, and a six-axis gyroscope.

Teaching code — Robot Inventor supports programming the robots using both the Scratch drag-and-drop language as well as Python. The idea is that children will learn the fundamentals of computer programming, like if-then conditionals and other core concepts underlying modern programming today. The app — which is available for Windows 10, macOS, iOS, and Android — includes instructions for coding the functionality of each of the robots.

Among the robots included in the kit are Charlie, a robot that's capable of dancing and giving out high-fives, and Tricky, a robot that's capable of playing basketball, soccer, and bowling. Using a 5x5 LED matrix that's included in the box, the robots can be given animated faces, a trick straight out of the Lego Mario playbook. The LED matrix includes more sensors built-in as well, including an accelerometer, a speaker, a micro-USB port, and Bluetooth. With six input-output ports, you can attach even more sensors and motors and think up new things for your robots to do.

A bit pricey — Unfortunately, with all the gear this kit is packing it comes in at a pretty steep price of $359.99, which will certainly make it less accessible to families in lower-income households. That's sad because the STEM field is known for its lack of diversity among income classes. It would have been nice to see Lego sell each of the robots separately as well as in a bundle. Customers can buy all the parts separately, however, if they wish to. Of course, at this price, the other challenge is getting consumers to buy an educational robot instead of a Lego Lamborghini.