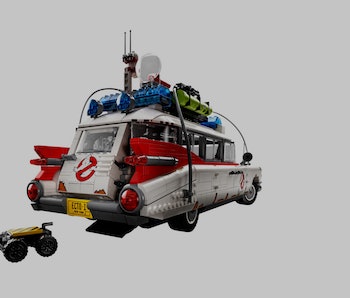 The famous Ectomobile from the Ghostbusters franchise just got the coveted Lego treatment. It's a total of 2,352 pieces all put together to give an air of authenticity for the popular movie vehicle that kicked some serious demon butt.

The Lego Ecto-1 comes with predominantly red and white pieces alongside some tinges of yellow and blue. The Lego edition is nearly identical to the 1959 Cadillac Miller-Meteor ride, has a ghost detector, a roof rack, a windshield, a steering wheel, and of course, the Ghostbusters logo on both driver and passenger doors.

According to Hypebeast, Michael Psiaki, Lego designer, explained, "I love creating LEGO vehicles, and having previously designed the Lego James Bond Aston Martin DB5, I loved the challenge of working on the ECTO-1. This is the largest and most detailed version of this car that we have ever created. It is crammed full of authentic features and Easter eggs that I’m excited for builders to discover as they put this model together."

How much? — Let's get the price tag out of the way. The Ecto-1 will cost you $199.99 and goes live on November 15. You can add it to your wishlist if you're really itching to make your own model.

The ghost mobile not only has the famous sniffer but also the gunner seat as shown here, which "rotates out of the car to catch ghosts while the car is moving," per Lego.

You also get the chance to use the Remote Trap Vehicle, which you probably remember as the compact rider that detached itself from the main ride to zap and trap demons. The front of the car is impressively similar to the classic 1959 Cadillac Miller Meteor while the back releases a ghost trap with a lever at the top.

A look from the back.

It's the perfect gift for Ghostbusters fans. You don't have to pull a Ray Stantz and pay almost $5,000 (which would be nearly $12,000 today) to make the right kind of Ectomobile. A mere $200 on the table and the ghost-busting ride made up of 2,352 pieces is all yours. And if you're not into Ghostbusters, maybe you'll enjoy looking at these Lego-block-colored Adidas sneakers, this Lego and Ikea collaboration for storage boxes, or the strange and wonderful science behind Lego's little computers.