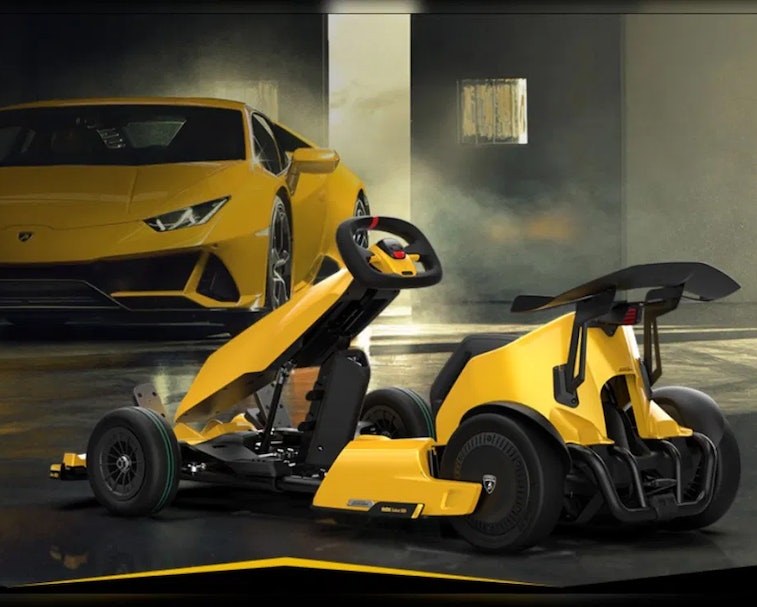 Lamborghini's are often thought of as go-karts for adults. Really, really rich adults. Or cryptocurrency millionaires, who are at least really rich. But now Lamborghini is offering an actual go-kart for adults. Made in partnership with Xiaomi, this Lambo is built for track racing only and goes on sale today for $1,450.

Lambo's claims to racing chops are obvious, but what does Xiaomi have to do with wheel-based fun? The Chinese maker of budget smartphones, smart kettles, TVs, and anything else you can stick a battery in already makes many of the electric scooters you see on the streets today under its Ninebot brand. Ninebot in turn also owns the remnants of Segway. So, in short, it knows a lot. Enough for Lamborghini to partner with it, which is really all you need to know.

It's hard to ignore how much the Lamborghini Edition go-kart looks like a riding lawnmower. In fact, it's too bad this Lamborghini isn't one, because it'd probably make your kids much more interested in trimming the green stuff. So much so, they'd probably even fight to do it. We'd love to believe that's in the pipeline, but adding spinning blades to a racing go-kart is probably a terrible idea, whether you're an adult or a child.

Make everyone on the track jealous — Sadly, this vehicle isn't street legal. But it apparently folds up easily enough you can put it in your car and take it anywhere (that has a race track or other private roads) you want to have fun. If you're into go-kart racing you'll certainly be the coolest person on the track with this beneath your butt. And, unlike any other Lamborghini, this one is environmentally friendly thanks to its battery power.

If you want to live the Lambo life on a budget, you can purchase the go-kart directly from Xiaomi's website. Though you'll have to pay in yuan and might need a freight forwarder / proxy to help you get it into the states. But that's a small price to pay for the cheapest Lambo on earth.