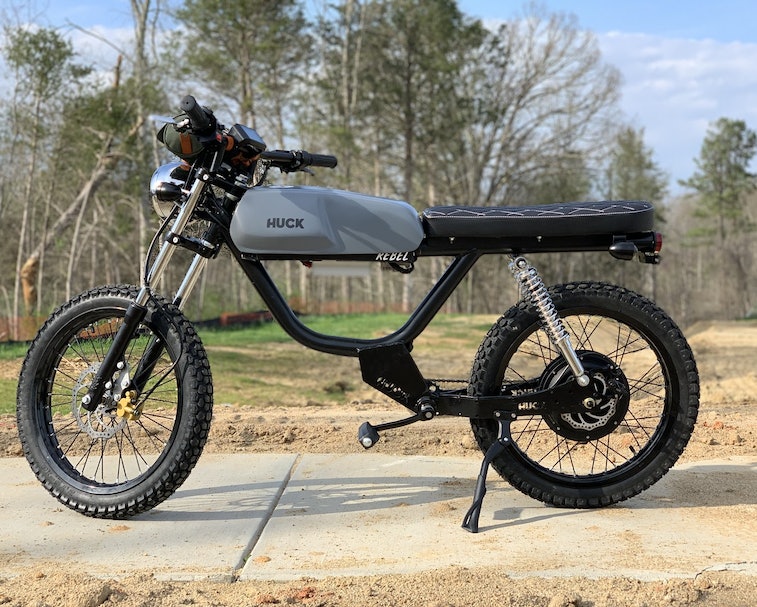 As people move from filling up their bikes to charging them, the options keep getting cooler. Generally, however, they've sat at two ends of spectrum: the electric bicycle and the electric motorcycle. Huck Cycles, though, is helping swell the ranks of the middle-ground: electric mopeds. Its new line of "bikes for people who don't suck" draws on classic moped design, offers a wide range of price points and power outputs and looks great while doing it.

Eat your heart out, Europe — From Italy and Greece to France and Portugal, when we think of mopeds we think of European vistas and winding, rural roads. That or European teenagers carousing around narrow streets tooting their horns and generally being a nuisance. But there's none of that here. Huck Cycles is an American company selling bikes built by military veterans using mostly American parts and designed for U.S. roads.

Power and pedals — The bikes range from the entry-level 700W Karma with its 20 mph top speed and $3,000 price tag to the popular Rebel’s far speedier 50 mph (in 1,000W or 2,000W iterations.) At the top of the pile, there's the blow-your-hair back 3,000W Stinger’s 60+ mph top speed and $4,000 starting price. Which you choose will likely depend on the legislation in the state where you plan to ride, how much you're looking to spend, and whether you're after more of an e-bike experience or a moped one. Buyers can also choose from batteries between 52V and 72V.

Class 2 compliant — All of Huck's bikes are set to comply with Class 2 regulations (a top speed of 20 mph) at the outset, but the company supplies instructions on how to adjust the limiter so those who are using them in places that allow for higher speeds can do so. Rival rides like the Falcon BLK come with similar regulation-friendly options, but the Falcon suffers next to Huck's offerings due to its starting price of almost $8,000. Gulp.

Huck Cycle's mopeds are handmade to order by the small, in-house team, Electrek reports, which means they can be thoroughly customized. But the combination of labor-intensive work and a lack of desire to become the Ford Motor Company also means Huck Cycle only cranks out about 10 bikes a month. The fledgling company is already at least two months deep in back orders for its various models, so if you want a ride you should act fast, especially if an all-electric two-wheeler is part of your strategy for the end times. And really, along with a way to keep it powered up, it should be.