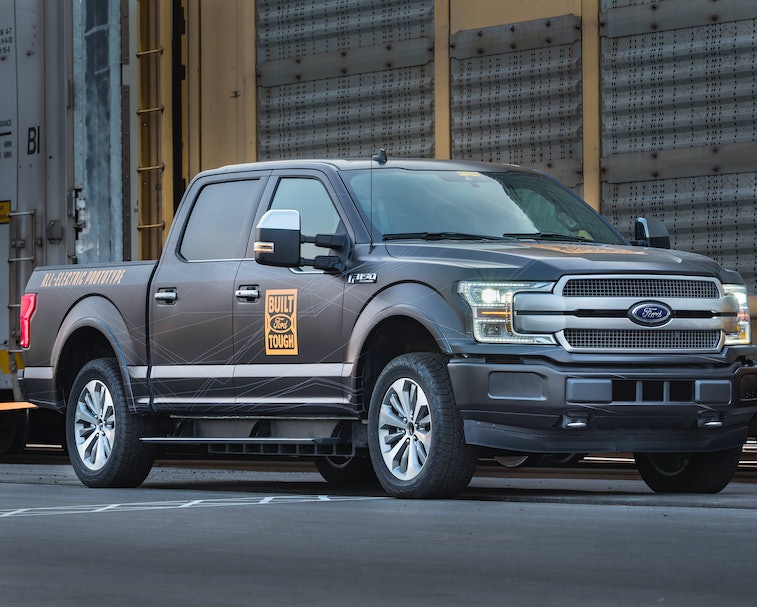 Ford last week released a new teaser video showing off a prototype of its all-electric F-150, with shots of the vehicle towing heavy trailers and flying up a 60 percent slope. The electric pickup truck is slated to reach customers in mid-2022, and Ford says it will be superior to any F-Series truck on the market today.

While Tesla's Cybertruck is facing competition from Rivian and others, it's Ford that has the best shot at worrying the world's most valuable car company. The regular, gas-guzzling F-150 has, after all, been the best-selling truck in the U.S. every year for almost 40 years. Plus, new features, like the ability to share power from the battery on job sites (or campsites) could make it more attractive to conservative buyers who aren't sold on the Cybertruck's bold design.

Thankfully, we don't see Ford making any significant modifications to the design here — some automakers have a tendency to completely revamp the designs of their cars for electric variants. The BMW i-series electric cars have a radical design that can make them a harder sell for those who want a more classic look.

Americans want trucks, not sedans — Trucks, in particular, could be a big step for the drive towards electrification. Ford's F-Series trucks are the most popular vehicles in America, with trucks being the overall most popular category, but most electric cars on sale are sedans. Trucks are particularly important in the lucrative business market, and Amazon has committed to buying 100,000 electric delivery vans from Rivian along with investing in the company's recent $2.5 billion fundraising effort. Tesla has said its Cybertruck will go on sale in late-2021.

Ford says that its electric F-10 will feature dual-electric motors to deliver more horsepower and torque than any F-150 available today, and will have the fastest acceleration and greatest ability to tow heavy trailers. Since battery packs will run along the bottom of the vehicle, a front truck will add more cargo-for ability. Customers can also use the truck's batteries for mobile power. That could be incredibly handy contractors or campers alike.

Changing the calculus — Not that any of that really matters. Trucks are one of the greatest examples of America's tendency for overconsumption. People just want the extra space, with most using their trucks for... commuting, not the type of work that requires the unique capabilities of a truck. Trucks get 10 miles per gallon less than sedans on average according to the EPA.

They're a waste of valuable space and harm the environment, but people look past that when gas prices are low because they're comfortable. An electric truck is still fraught, but it would at least change the environmental calculus for those too stubborn to give them up. However, aside from being more environmentally friendly, the all-electric F-150 is also on course to cost substantially less to maintain than a combustion engine version, making what's expected to be a higher upfront cost easier to stomach.

For Ford, an estimated $42 billion of its U.S. revenue in 2019 came from the F-Series pickups. The company's automotive division did $143 billion in sales last year. If it can hit a home run with the electric iteration, it's going to be a force to be reckoned with in the electrified automotive sector.