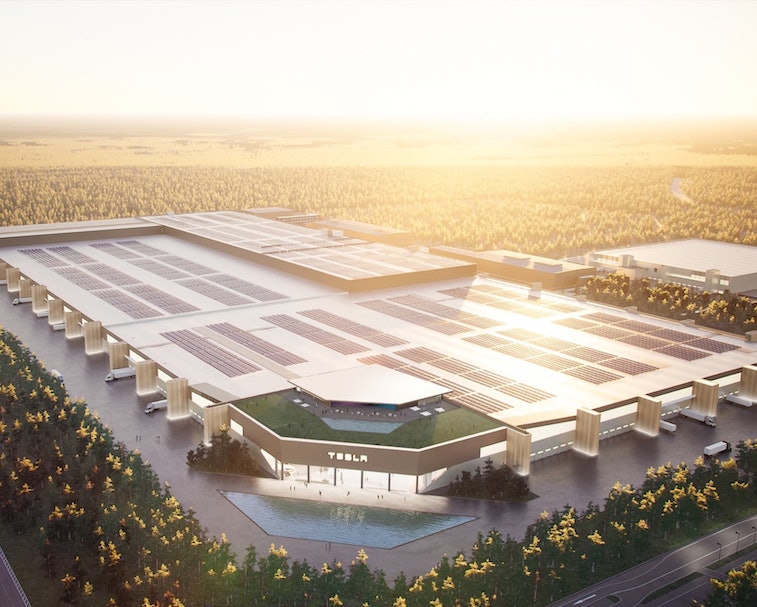 In November last year, before 2020 turned our world upside down, part-time DJ and full-time dual CEO Elon Musk tweeted that Tesla's next Gigafactory would be constructed in Germany. To be specific, the tech billionaire hinted that the factory would be situated on the outskirts of Berlin. At the time, he noted that the facility would be primarily tasked with building "batteries, power-trains, and vehicles, starting with Model Y."

A bit of sleuthing online revealed that Musk's Gigafactory would likely be located near the Berlin Brandenburg Airport, which was being constructed at the time. It looks like now we have an idea of what this Gigafactory will look like. On Twitter, Musk shared a render of the upcoming site, which reveals a visual treat that looks exactly like the sort of place the vehicles of the future will be built... surrounded by what appears to be fields of sunflowers. Dreamy.

Here's a preview — Musk's previous Gigafactory in Reno, Nevada, is a behemoth of a facility taking up 1.9 million square feet of land. It's tasked with supplying lithium-ion batteries and carrying out electric vehicle subassembly, which probably explains why Musk calls it the "machine that builds the machine," as The Verge points out. It's pompous but it's true.

This new Berlin Gigafactory — like its Reno parallel — will also have solar panels, storage solutions, and according to Musk, a possible "rave space." Musk has a habit of trolling online, so it is possible that he's just joking. But if the rave space indeed does go into construction, it will be on the rooftop of this Berlin Gigafactory. With Berlin being famous for its nightlife, a rooftop club is either the perfect idea... or the perfect dad joke.

When does it go live? — The Tesla billionaire has been decidedly reluctant to cede any ground to COVID-19 shutdowns, including making his workers show up even when the local authorities suggested that was reckless. Much to Musk's chagrin, it is likely that the Gigafactory, which was set to open in 2021, has witnessed some delays due to the pandemic.

Will it impact Berlin's economy? — Compelled by habit, Musk enjoys making bold claims about his various ventures. When it came to the Reno Gigafactory, he claimed that it would give the Nevada economy a boost of $100 billion over the next 20 years. To a degree, Musk's ambitious statement has come to pass as the company employs at least 7,000 local workers for the Nevada facility. So, its Berlin counterpart could also boost local job growth, security, and stability in the area.

Geodesic beauty — Our questions about economic growth, construction costs, and environmental sustainability aside, the upcoming Berlin Gigafactory does look rather beautiful. Musk is notoriously private about the core developers behind his architectural adventures but it would be nice to know, eventually, who came up with the concept of this rather crisp render. Hopefully, it won't be hellish to live next door to the Berlin Gigafactory as it seems to be with SpaceX in Texas. Fortunately, building cars is far quieter than launching rockets. It's also, likely, quieter than most Berlin nightclubs.