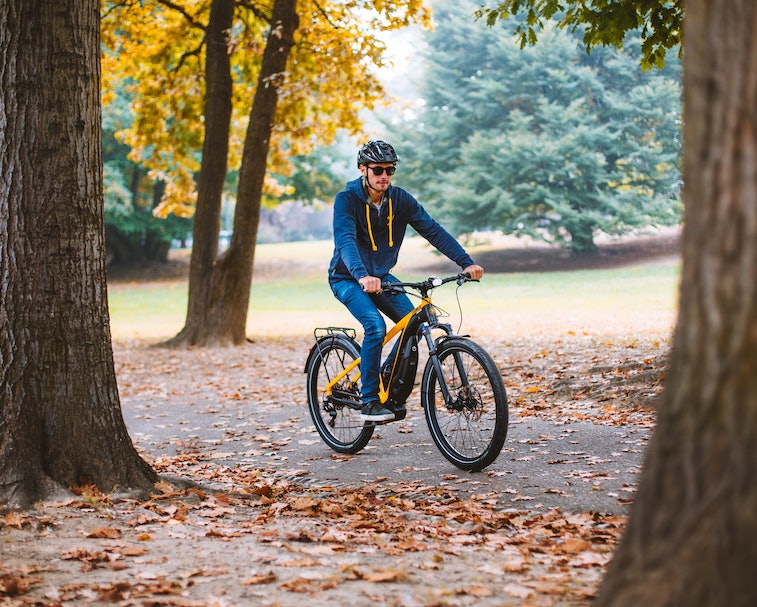 Italian motorcycle-maker Ducati has revealed a new electric bike called the e-Scrambler, but its neither a scrambler, nor a motorcycle. Instead, it's a $4,000 electric bicycle with fenders and a rear parcel rack, destined for bike paths, pavements, and supermarket parking lots rather than racing tracks or dirt circuits.

The essential stats – The e-Scrambler features a Shimano Steps E7000 motor with an output of 250 watts and 60 Nm of torque. That's a little underpowered for its class and for the price, but there's a lot of caché in the name Ducati to offset that. There are integrated lights, a kickstand, and a rear rack that Ducati says can carry 55 lbs. It's unclear what the official range of the 504 Wh battery is — the actual range will, of course, vary depending on the weight of the rider, the topography of the journey, and enthusiasm on the throttle — but buyers can likely expect somewhere around 75—100 miles based on the range of similar e-bikes.

In terms of riding experience, the e-Scrambler has a Suntour XCR fork with 100 mm of travel for suspension relief and a strong aluminum alloy frame. If you live in a city like New York where the roads are pot-holed and patchy, some suspension is practically a necessity.

E-bikes are great for those looking go faster or further than a regular bicycle allows, or who want to commute without working up too much of a sweat. But because the battery and motor assist rather than doing away with pedaling entirely, there's still the option to get some exercise if you want to. In fact, thanks to the added weight of the battery and motor, e-bikes can give you a more thorough workout if you dial the electric assistance right down.

While e-bikes have become hugely popular in some cities for food deliveries, considering the price, we don't expect to see too many Ducatti e-Scramblers laden with Postmates or Uber Eats bags anytime soon, no matter how suited to the job they'd be.

Not super exciting, but likely a good ride – Ducati has previously released high-performance electric mountain bikes, but the e-Scrambler is really meant for flat urban terrain. It has some suspension up front but not the premium, motorcycle-level suspension it puts in its e-MTBs.

The e-Scrambler costs €3,699 (~$4,280) and besides the Ducatti branding, doesn't seem to have a whole lot of Italian flare on offer. It's very understated compared to the company's motorcycles. Perhaps it's just because we're not used to something so pragmatic from a brand we usually think of a brash and bombastic.

Something like the Superstrata Ion is much more ambitious with its striking design and frame that's 3D printed for each customer, while still managing a similar price point. And there are plenty of great e-bikes available for a fraction of the e-Scrambler's price. You're going to have to be a serious Ducatti loyalist with a substantial budget to justify the e-Scrambler, though we're sure it's a dream to ride.