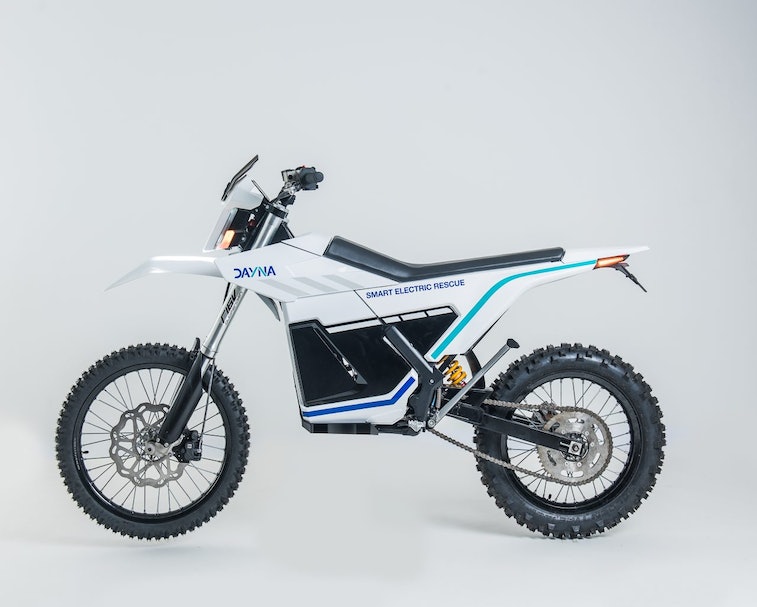 Students from Barcelona's University School of Design and Engineering have used 3D printing to create parts for a mountain e-bike designed to be used for rescue operations in hostile environments. The e-scrambler, called Dayna, uses 19 3D-printed parts made up of a variety of reinforced materials.

Dayna will be entered into the Barcelona Smart Moto Challenge, where students from around the world compete to develop the best electric motorbike. The bike is based on a connected smart system, equipped with proximity sensors, Bluetooth, and GPS. The information collected is supposed to help monitor rider movement and send out alerts in the event that the rider needs help. The group behind Dayna, the Elisava Racing Team, hopes to commercialize the bike someday.

Speed and iteration — According to Jacobo Mateos, project manager on the Elisava Racing Team, using 3D printing enabled the team to quickly test out parts in a variety of shapes that any other manufacturing process would not have allowed. Typically, creating a new part like a fender requires first designing and engineering it, and then costly and time-consuming prototyping. 3D printing changes, allowing for a huge range of shapes and rapid testing. Creating parts quickly, even if 3D printing likely won't be used in the commercial product, allowed the team to quickly evaluate a part for shape, finish, and functionality.

Using a printing method called fused filament fabrication (FFF), the team was able to test different materials for various parts based on their reinforcement capabilities. It landed on using PPGF GF30 for the fender, a form of thermoplastic that is reinforced with glass fiber content and is specially designed for 3D-printing filaments. The material was ideal for the fender, which is one of the motorbike pieces most prone to breaking from shocks and friction. “Thanks to fiber-reinforced materials, in this case, carbon fiber, we were able to implement the pieces we wanted, with the versatility in the shape of the piece that FFF printing allows us to do,” said Mateos.

Hype cycle — The 3D printing industry went through a boom and bust cycle in the 2010s when excited insiders envisioned that everyone would soon have a 3D printer in their home, capable of printing whatever household objects one might need, be it bowls or screws or whatever else. That didn't happen because 3D printing objects of a high-quality is actually pretty difficult, and to make the parts needed for something like a motorbike you would need a very large printer.

But various legitimate use cases for 3D printing have arisen, including this one. 3D printing can cut down production times for low-volume components because there isn't a need to build tooling processes for each specific part.