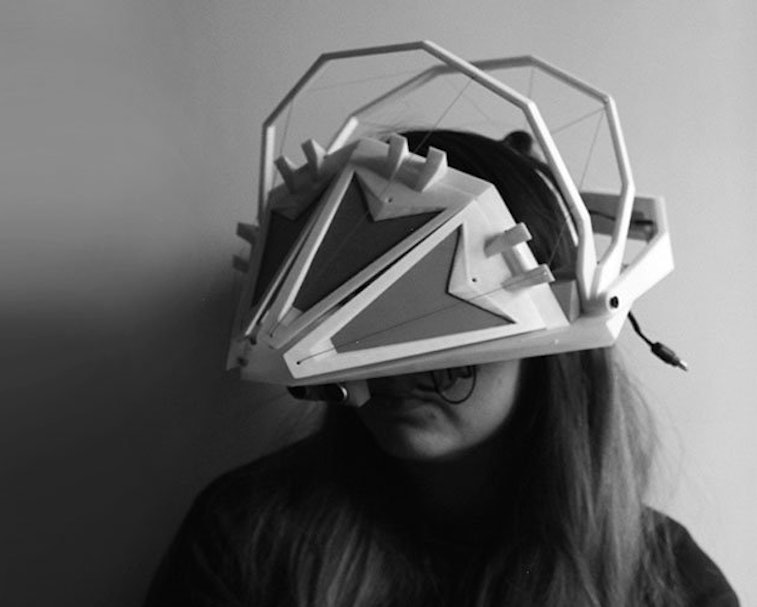 Designers Deniz Akyürek and Sneha Vivek have created a headpiece that's supposed to fight visual prejudice and make the wearer reassess their biases. It's a physical tool to help with the idea of not judging books – or people – by their covers and resembles a spacecraft crossed with a hat. Or perhaps those are just our own sci-fi-tinged prejudices showing.

Even when we don't consciously think about it, we're constantly looking at people out in public and choosing to avoid or engage with them based on immediate assumptions about their appearances. The Bloom, which the pair submitted to Designbloom, aims to address this by distorting our perception of the world around us.

A new way of seeing — The headpiece works by using a pair of lenses and a series of mirrors to break the user's view into fragments and create a kaleidoscopic effect. It distorts the way you see your surroundings into a beautiful — but confusing — visual puzzle. A motion sensor works in conjunction with a built-in motor to lift the mirrors once you're actually close enough to someone else to have a conversation with them. That way it's difficult to make quick judgments about them before choosing to talk to them.

The unknown is scary — It's a beautiful yet simple concept that could remind us of the snap judgments we make about others all the time, and the way many of us are conditioned to seek out people like us rather than interacting with strangers who strike us as different. It's understandable — the unknown is scary sometimes, so we gravitate to the familiar instead as a protective mechanism. But in a time when racial bias and other preconceptions are being challenged, it's a fitting project.

The self-reinforcing cycles — Inherent prejudices and racism can make the world worse, though. We may judge people unfairly because we unconsciously assume they won't have the right skill set or attitude to perform a job, for instance. The term "culture fit" in business is often a catch-all, euphemistic term that really means someone is different from the baseline. And so the vicious cycle continues where women or minorities are excluded, which in turn means those looking to participate in a sector don't see themselves represented in it.

You wouldn't know it today, but the white male-dominated field of computer science was ruled by women until the 1980s when marketers started promoting computers as toys for men and boys. The moon landing might not have happened had it not been for the female computer scientists and mathematicians at NASA. As the world gets ever more polarized, addressing these sorts of assumptions is ever more important. If the Bloom can get us talking about that, it's succeeded. Just don't try and wear it when you're riding a bicycle, driving, or anywhere treacherous, please.