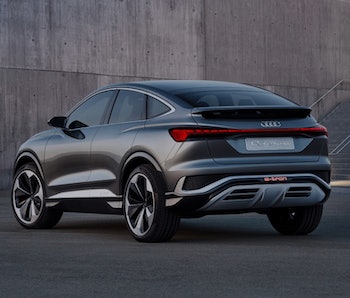 Audi has unveiled a concept design for the Q4 Sportback e-tron, an all-electric follow up to the existing e-tron but at a much lower price. The new Q4 is expected to start at $45,000 when it launches in late 2021, a substantial drop compared to the $77,000 for the existing model. With tax incentives, the base model would only cost about $37,000.

At that price, Audi could offer a serious alternative to Tesla. Exact specifications aren't known yet, but Audi says the top of the line Q4 Sportsback e-tron will get 280 miles of range — up from the 218 miles of the existing model — and accelerate from zero to 62 mph in about 6.3 seconds. That's nowhere near Tesla's speed off the line, but it's also by no means the only factor buyers consider. Beneath the floor, there's an 82 kilowatt-hour battery, and being an Audi, there's always-on four-wheel drive.

Sticking to the classic look – While the designer of the Q4 e-tron's exterior said in an interview with Electrek that the production car will look very similar to the images Audi has shown off, there's still the possibility the company will make some changes before the first units roll off production lines. We'd be surprised if much changes, though, especially with both the exterior and interior already being as striking as they are.

Tesla's new Model Y (starting price $52,000) might be the closest comparison to the Q4 Sportback e-tron. Taste is in the eye of the beholder, but we're definitely digging Audi's design a little more. The problem with the Model Y is that it was made to look like a bulked-up Model 3, whereas this e-tron concept takes a more traditional SUV look. And it's certainly much nicer than some electric cars that have been specifically designed to look futuristic, like the divisive BMW i3 or upcoming i4. Audi makes beautiful cars, so why mess with a winning formula?

Tesla leads the charging charge — There are still reasons one might choose a Tesla over this car, most prominently, to get access to Tesla's Supercharger network. Tesla has built out an extensive network of chargers across the U.S. and tightly integrated it with the cars, so drivers can set a destination and the car will intelligently plan detours to charge along the way as needed.

Also, of course, legions of people are obsessed with Elon Musk and his aura is... difficult to replicate. Tesla recently became the most valuable automaker in the world. Most people probably couldn't even name Audi's chief executive (his name is Markus Duesmann).