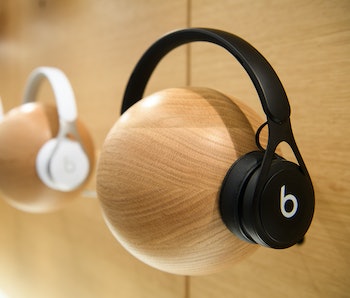 Apple’s long-rumored over-the-ear wireless headphones might be customizable with magnetic parts, according to people familiar with the matter, Bloomberg reports. The headphones are being crafted in at least two variations, one with “leather-like” fabrics and one with more breathable materials to be marketed for fitness uses.

Apple has been developing this line for at least two years now, though the company has never actually announced the product. With the success of both the AirPods and the AirPods Pro, and its ongoing success with the Beats brand it acquired in 2014, Apple has shown itself to be a serious competitor in the headphone market. Whenever they’re finally released, the company’s over-the-ear offerings will surely continue that well-crafted legacy.

Here’s what we know — Those familiar with the product say the headphone prototype has a retro look, with oval-shaped ear pads that swivel and a thin, metal headband that extends from the side of each ear. The ear cups and headband padding are attached to the headphone frame with magnets, allowing the parts to be swapped out by users. These swappable parts would likely allow changes in both color and style — allowing for switches from comfort to fitness, for example.

The headphones will reportedly come with the noise-cancellation tech consumers have come to love in the AirPods Pro, and they’ll be pairable to Apple products using the same wireless technology. They’ll have some sort of touch-control interface and be compatible with Siri voice control, too. Bloomberg’s latest report sets the headphones price point at around $350.

How long does it take to make a pair of headphones? — We’ve heard whispers of this project for years now. Bloomberg first reported the existence of Apple’s over-the-ear headphones back in early 2018 and cited a potential for the product’s release later that year.

But the outlet then reported a few months later that the headphone project had been pushed back to a 2019 release, citing “development challenges.” We didn’t hear much about the headphones through 2019, though. Apple seemed to have shifted its focus to the AirPods Pro, letting their over-the-ear siblings get pushed to the back burner.

Now that COVID-19 has forced the world to stay at home, it’s unlikely we’ll be seeing these headphones any time soon. Those familiar with the product’s development said final testing of the products will likely be compromised by the pandemic’s disruption.

Whenever these headphones do see the light of day, they’re likely to bring in the big bucks for Apple — last year the company made $24.5 billion from its accessories alone. But it could be a while yet until we can buy them.