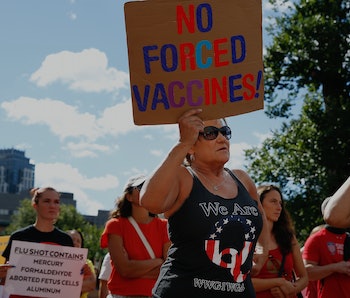 Facebook’s hate speech and misinformation whack-a-mole policies are exclusive to 2020. An audio recording of an all-hands meeting obtained by BuzzFeed News indicates that Mark Zuckerberg is tired of trying to be a good guy. This year’s presidential election and global pandemic have fueled Facebook to do a 180 — uh, let’s say 100 — degree shift from its previously laissez-faire moderation policies. Once we’re clear of the elections and vaccines are available, Zuckerberg doesn’t plan on adding any new policies.

A pocket dimension — Zuckerberg seems to be taking the incredulous nature of 2020 to a fantastical realm, considering the year to be an anomaly that will somehow just swing back to some sense of normalcy. The steps towards better hate speech moderation and misinformation policing are simply a stopgap on the way to business as usual.

“This does not reflect a shift in our underlying philosophy or strong support of free expression,” Zuckerberg reportedly said. “What it reflects is, in our view, an increased risk of violence and unrest, especially around the elections, and an increased risk of physical harm, especially around the time when we expect COVID vaccines to be approved over the coming months.”

Of course, Facebook doesn’t need to do any more work to protect its most vulnerable communities because racism and other forms of discrimination will just disappear next year. This line of reasoning at best imagines a Biden administration while grossly misunderstanding the social movements at hand.

Most grotesquely, Zuckerberg’s comments showcase how much he distances Facebook from the problems it clearly creates. This hotbed of misinformation, conspiracy, and hate didn’t arrive out of the blue; it’s the outcome of crafting an addictive product and resisting changes in service of the bottom line.

Employees shouldn’t speak freely though — Free speech is apparently not one of the millennial perks offered to Facebook employees. The DOJ just hit Google with an antitrust lawsuit, and Facebook is expected to deal with one of its own regarding its acquisition practices. After waxing poetic about free speech at the company, Zuckerberg also told employees they couldn’t talk about antitrust issues. Google has a similar policy and Facebook is following suit to minimize the appearance of inaccurate claims in future subpoenas.

Facebook users can say whatever they want, likely avoiding lackluster safeguards for marginalized users, but employees need to be tight-lipped in order to protect the company. Nice to clearly see where the company’s priorities lie.