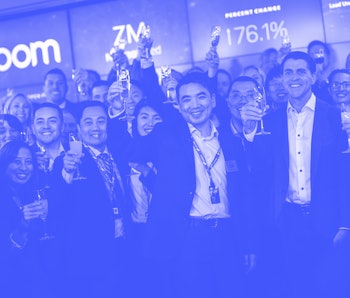 Zoom briefly blocked the paid account of a Chinese activist living in the United States for organizing a commemoration of the 1989 Tiananmen Square protests, Axios reports. The account, which belongs to Zhou Fengsuo, founder of the U.S. nonprofit Humanitarian China, has since been restored.

Zoom confirmed in a statement that Zhou’s account was blocked to comply with local law.

“We regret that a few recent meetings with participants both inside and outside of China were negatively impacted and important conversations were disrupted,” the company stated. “It is not in Zoom’s power to change the laws of governments opposed to free speech. However, Zoom is committed to modifying its processes to further protect its users from those who wish to stifle their communications.”

It’s no secret that China’s Great Firewall censorship machine keeps politics on lockdown within the country’s borders. But Zhou lives and operates his account from the United States. Though Zoom has repeatedly attempted to assuage the public’s worries about its ties with China, this banning demonstrates that, despite its best efforts, the company can’t untangle itself from its roots.

Shocked and disappointed — Zhou found out about the account suspension when he tried to log in on June 7. He was given no insight into why he was unable to log in, and Zoom did not respond to his repeated emails.

Zhou said in an interview that he was “shocked and disappointed over what happened.” He also said that “we can’t stand that an American company put Chinese-style restrictions on users in the U.S.”

About 250 people joined the May 31 Zoom call, which included speakers such as mothers of students killed during the 1989 crackdown.

Fuel for the anti-China fire — Zoom has been treading on thin ice ever since its effortless rise to dominance at the beginning of the COVID-19 pandemic. Some of the pressure put on the company has been related to its often slack security practices; still more of the company’s drama, though, is because of its tenuous ties to China.

Back in April, the University of Toronto’s Citizen Lab reported serious concerns over Zoom’s security protocols, which sent the company into security overdrive. Citizen Lab warned also of Zoom’s ties to China, saying that the company’s Chinese workforce could make it “responsive to pressure from Chinese authorities.”

Now we’re seeing that warning come to fruition. Zhou was subject to China’s strict censorship laws for the very fact that Zoom is affiliated with the company. Last month, Zoom said it would no longer provide free accounts to China-based users to comply with regulatory requirements. But that hasn’t been enough to satisfy the Chinese government’s censorship policies.

Zoom’s continued juggling act between China and the rest of the world is only becoming more complicated as time goes on. Rather than face the problem head-on, Zoom just keeps throwing Band-Aids on the situation. The complexities of the situation are not going to go away any time soon.