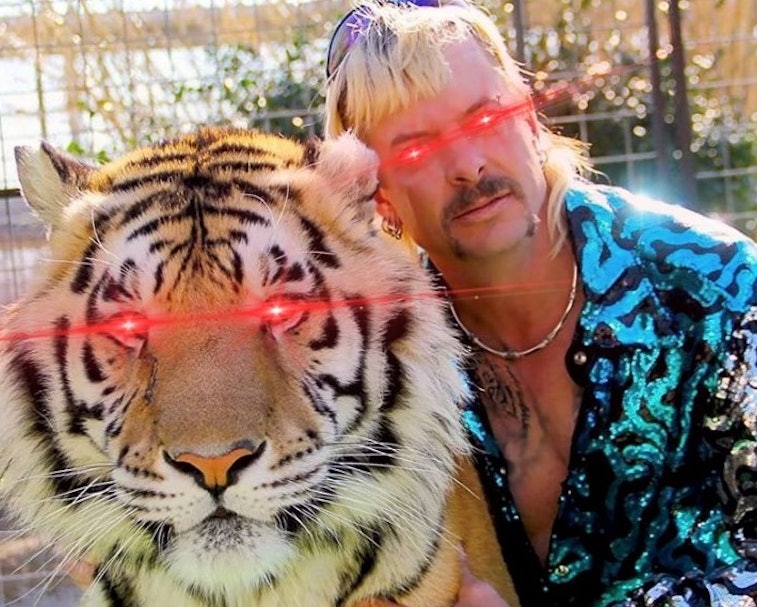 Remember Joe Exotic? You know — the flamboyant, gun-totin', big cat-obsessed star of last year’s much-memed Netflix true-crime miniseries, Tiger King: Murder, Mayhem, and Madness? Yes, that Joe Exotic, who is also currently imprisoned in Fort Worth, Texas, for up to 22 years on 17 federal charges of animal abuse alongside two charges of attempted murder for hire? Well, you can now bid on some of his ridiculous outfits, firearms, as well as exclusive “cryptocurrency themed” NFT artwork and audio recordings from the man himself, because this is 2021, baby.

“Being able to auction off collectibles makes me feel connected with the outside world, especially without my cats by my side,” Joe Exotic says in the official press release. “Whether you love me or hate me for what you think I’ve done, there’s no doubt that everyone wants a piece of The Tiger King!” No doubt, Joe. No doubt.

No word on when Carol Baskin will release her own CarolCoin cryptocurrency, although we assume that or something equally inane and uncomfortable will happen eventually.

Pistols, fringed jackets, and bikinis — So “Joe Exotic, former zoo operator, global meme sensation, and television star, is launching his NFT from federal prison in Fort Worth, TX,” reads the official announcement’s opening, which... really sums it up pretty well, honestly. But like all trainwrecks, real or digital, we can’t help but continue staring.

We brought this upon ourselves — Honestly, we shouldn’t be too surprised Joe Exotic and associates are getting in on the NFT trend... after all, a lot of them seem to be pretty shady, tasteless, and / or blatantly opportunistic cash grabs.

It’s somewhat unfortunate, given that the NFT landscape still can truly benefit artists and content creators, providing decent compensations in a marketplace that is often anything but fair to them. It can also provide online street justice to creeper dudes, so that alone is definitely worth more than any Tiger King pistol, by our estimates.