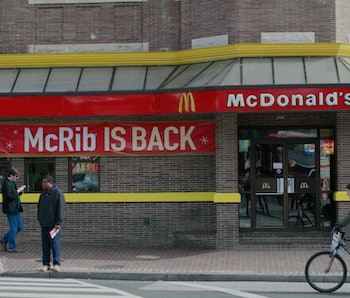 It’s the most wonderful time of the year (for some): McRib season. McDonald’s’ most ephemeral menu item has returned once again from the darkness to bring barbecue pork to fast food lovers across the United States. And this year, the fleeting treat can stick around in more than just your arteries if you so desire (and if you’re lucky). McDonald’s has gone off-script and created a digital McRib in the form of an NFT.

No animals were harmed in the making of the virtual sandwich.

You can’t buy the McRib NFT, though. Only ten are available in total, and all of them will be raffled off at random to those who enter the contest. Entering the contest is almost maddeningly simple, so you can expect the competition will be fierce.

The only catch here is that winning the McRib NFT doesn’t entitle you to any servings of the physical sandwich. You’ll still have to buy that one with real cash.

Love me love me please retweet — Here’s how you enter for a chance to win one of those ten shining McRib NFTs. Log into your Twitter account (who are we kidding, you’re already logged in) and navigate to the McRib NFT announcement tweet. Then just hit that retweet button — not the Quote Tweet one — any time between now and November 7. Congratulations, you’re now in the running for that shiny digital sandwich.

Just one more thing: According to the contest’s official rules, you can’t delete the tweet from your profile before the end of November. Also, you can’t tweet anything disparaging about McDonald’s. Ever.

Sure, fine, why not — The McRib NFT will no doubt become a cult classic like the sandwich itself. This one won’t go moldy if you hold onto it for more than a week, though; in fact, it’ll probably appreciate in value over time as a collector’s item. McDonald’s values each NFT at just $20 in the official rules, but anything goes on the resale market.

Sure, the idea of an NFT sandwich is enough to make anyone roll their eyes at least a little bit. But it’s really just harmless fun. In a world where NFT scams are the norm rather than the exception, a virtual McRib is the least of our crypto-related concerns.