You can buy the royalty rights to the ‘Shrek’ soundtracks for $2.3M 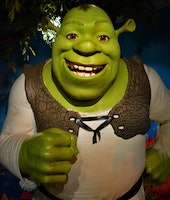 The price of a masterpiece.

Most online advertisements promising to earn you passive income are a scam, but this one is anything but. Royalty rights to the soundtracks for the Shrek franchise are up for sale, guaranteeing perpetual income whenever the music is played for the rest of your life.

For just $2.3 million, you will earn money whenever a Shrek movie is played on TV, streamed online, as well as whenever music is played directly from the soundtracks.

The catalog of movies the royalties cover include Shrek, Shrek 2, Shrek the Third, and Shrek Forever After. It also earns money from the holiday TV special Shrek The Halls, and funnily enough, the royalties even extend to I Am Legend, the 2007 apocalyptic Will Smith movie, because a scene from Shrek appears prominently in the film.

Math — Royalty Exchange, the platform that’s hosting the sale, says that the royalty rights up for sale generated $235,003 in 2020 with earnings having grown 33 percent over the previous year. So the purchase price is ten times its earnings in the past year. And since the revenues are apparently increasing year-over-year, it should take you less than ten years to recoup your cost, after which all earnings would be straight profit.

Staying power — The data that’s included in the listing is quite revealing, and shows how Shrek movies continue to generate a significant sum of money two decades after their initial premiere. There’s certainly a risk that earnings from television broadcasts — a big contributor to the royalty payments — could dry up, as networks move into streaming and begin developing their own content. But Shrek is an iconic character, and the data suggests people still love him.

A fifth film was canceled prior to the release of the fourth, then was revived in 2016 before being shelved again. It’s unclear if that movie will ever see the light of day, but Shrek was deemed “culturally significant” by the Library of Congress and in 2020 it was selected for preservation in the National Film Registry. Shrek has also periodically become a source of memes. So it’s still is alive and well in the culture’s consciousness.

If you have faith that the green ogre has staying power, you can buy the royalty rights now for the asking price or try making a smaller offer.