“I guess we still need to work on feminine adoption of cryptocurrency... We got to get some girls here next year... Women.” 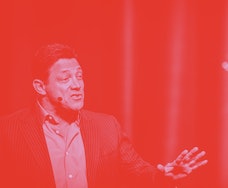 For the price of one bitcoin (around $40,000) nine of said dude-bros recently amassed at Belfort’s Miami (of course) mansion to hear the convicted felon discuss his latest, totally predictable career turn as a crypto whisperer. But to read the New York Times’ recount, it certainly sounds like a sizable portion of their blockchain Margaritaville getaway was spent bragging about sexcapades, shitty NFT venture ideas, and where in Japan you can go to find women unopposed to “octopus-play.”

Girls, sorry, women — The gender disparity in the world of crypto was so obvious at Belfort’s retreat that even he felt the need to address it (most likely because of the New York Times reporter standing nearby). “I guess we still need to work on feminine adoption of cryptocurrency,” he said. “We got to get some girls here next year... Women.” Great start to the event, Jordan.

At one point during the trip, the crypto bros and Belfort went to a high-end Italian restaurant (of course, again) for dinner, where “two guests discussed the mechanics of pursuing younger women without risking entanglement in a ‘sugar baby’ situation” while someone else pondered aloud “about how an enterprising strip club owner might incorporate NFTs into the business.”

Red pill, red flags — As ludicrous as the event sounded, it’s truly important to remember that these kinds of guys are the norm in the world of crypto. Like any other capitalist industry, the lucrative and volatile cryptocurrency industry is largely overseen by gatekeeping dude-bros who watched The Wolf of Wall Street and thought it looked like a badass life to achieve. It’s completely unsurprising to hear men like Belfort transition their grifting towards the blockchain, but that doesn’t make it any easier to accept.