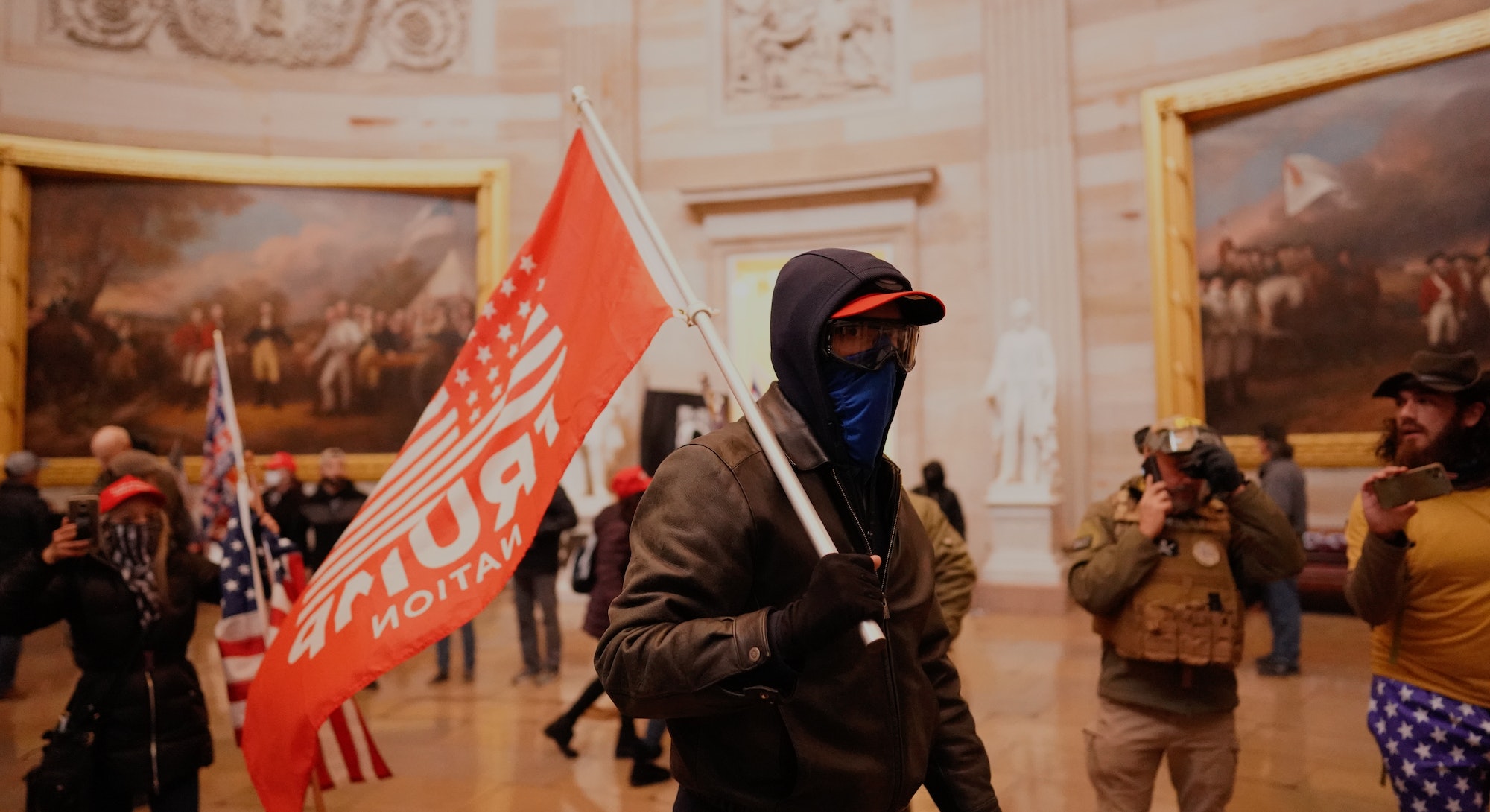 When Twitter and Facebook finally made the decisions to temporarily boot soon-to-be-former President Donald Trump from their platforms on January 6 amid escalating right-wing violence at the Capitol, there was no question as to where his following would go to regroup. The cushion had already been forming for months.

On Parler, the self-described “unbiased social media” app, right-wing extremists have been organizing by the thousands, most recently in a desperate attempt to “stop the steal” — a phrase amplified by Trump to contest his loss — ahead of electee Joe Biden’s inauguration. Many today are using it to plan their next steps after failing to stop the electoral vote count; currently, some are communing on the idea of forming the modern equivalent of “Civil War age” militias. Parler users and the broader public alike have speculated it's only a matter of time before Trump himself pops up on the app.

Their efforts behind the scenes culminated Wednesday afternoon in an unprecedented act of domestic terrorism that saw the U.S. Capitol breached by hundreds of Trump supporters who defaced, stole from, and quite literally pissed on America’s monument to the democratic process, stoked by earlier words of encouragement from their leader. By the end of the day, four people were dead and numerous injured, multiple pipe bombs were located and detonated by law enforcement, and someone was caught driving around with a rifle and nearly a dozen Molotov cocktails. An attack of this scale on the Capitol building hasn’t been seen since 1814.

For once, though, the violence inspired by white supremacist ideals can’t be passed off as the unforeseen acts of a rogue “lone wolf” — it was all planned in public on platforms like Parler, 4chan, and 8kun (formerly 8chan) leading up to the mayhem. In November, researcher Alex Newhouse of the Center on Terrorism, Extremism, and Counterterrorism at Middlebury Institute of International Studies published an essay for The Conversation on the right-wing migration to Parler, in particular, noting that the platform "has allowed racism and anti-Semitism to flourish." In it, he writes:

We have monitored far-right communities on Parler since March and have found frequent use of both obvious white supremacist terms and more implicit, evasive memes and slang. For example, among other explicit white supremacist content, Parler allows usernames referencing the Atomwaffen Division’s violentlty anti-Semitic slogan, posts spreading the theory that Jews are descended from Satan, and hashtags such as “HitlerWasRight.”

In addition, it is easy to find the the implicit bigotry and violence that eventually caused Facebook to ban movements like QAnon. For example, QAnon’s version of the “blood libel” theory – the centuries-old conspiracy theory the Jewish people murder Christians and use their blood for rituals – has spread widely on the platform. Thousands of posts also use QAnon hashtags and promote the false claim that global elites are literally eating children.

We all saw this coming, something NBC News reporter Ben Collins pointed out on air Wednesday night. And the gatekeepers of the internet helped it happen.

While fringe sites like 4chan and 8kun exist solely on their own domains, Parler has the added boost of app store availability, seamlessly extending its reach to iOS and Android users. In the past, both Google and Apple have taken action on apps that act as breeding grounds for hate and violence, blocking the right-wing social app, Gab, and Alex Jones' Infowars. Of its decision to pull Gab, Google in 2017 told ArsTechnica that apps "need to demonstrate a sufficient level of moderation, including for content that encourages violence and advocates hate against groups of people," adding that it is "a long-standing rule and clearly stated in our developer policies." But where are those policies today?

One day after the events at the Capitol, Parler still has a home on Apple’s App Store and the Google Play Store. Neither Apple nor Google have responded to Input’s requests for comment.

Blatant calls for civilian-led violence might be grounds for a ban on other social media sites, but Parler prides itself in adhering to what it believes is free speech under the First Amendment. If that speech leads to real-world harm, so be it. Parler’s Community Guidelines state that it would “prefer that removing community members or member-provided content be kept to the absolute minimum.”

“We prefer to leave decisions about what is seen and who is heard to each individual. In no case will Parler decide what will content [sic] be removed or filtered, or whose account will be removed, on the basis of the opinion expressed within the content at issue. Parler’s policies are, to use a well-known concept in First Amendment law, viewpoint-neutral. We do not curate your feed; we do not pretend to be qualified to do so. We believe only you are qualified to curate your feed, and so we give you the tools you need to do it yourself.”

Though the guidelines do state that Parler “will not knowingly allow itself to be used as a tool for crime, civil torts, or other unlawful acts,” its inaction in the wake of the insurrection that spawned at least in part on its platform suggests otherwise.

In a conversation with Kara Swisher on the Sway podcast Wednesday night, Parler CEO John Matze was flippant about the app’s role in the events at the Capitol, noting that it feels “surreal” but not exactly surprising “if you put yourself in the shoes of a lot of these people.” He later added, “I don’t feel responsible for any of this and neither should the platform, considering we’re a neutral town square that just adheres to the law.”

And so extremists turned once again to that “town square” to get organized.

On Thursday, an unverified public account claiming to be the official profile of Donald J. Trump (@ThePotusOfficial) joined Parler and unleashed a feverish tirade against the “unjust power of BIG TECH!” and the media, singling out Fox News as being “almost unwatchable” now. “From now I will be expressing my thoughts on Parler,” the account posted Thursday afternoon to its then 468 followers. It later went private.

At the same time, another account masquerading as the president called “President Trump Tweets” started gaining traction as screenshots made their way to other platforms, including Facebook. Misled users expressed their appreciation, one commenting: “Found him… thank you!”. Fact-checkers at Reuters have concluded that account is a fake.

Before @ThePotusOfficial shut its doors, Input viewed numerous posts intended to fuel supporters’ distrust of the electoral process. Echoing the actual statements Trump made on Wednesday as lawmakers urged him to call off the mob, the account posted: “Our Country has had enough, they won’t take it anymore! We hear you and love you) from the Oval Office. MAKE AMERICA GREAT AGAIN.”

It also shared a video of Trump giving a speech hours before the chaos, insinuating that it showed what really happened at the Capitol and telling followers to “judge for yourself! For if there was any incident of violence involved,” again calling out the “FAKE NEWS NETWORK.” In his speech that morning, Trump had assured supporters: “We will never give up, we will never concede.”

Verified accounts on Parler have continued pushing Trump’s agenda while he remains muzzled by other social media platforms. Tiffany Trump, the president’s daughter and a “verified influencer” on Parler, shared screenshots of Trump’s statement delivered Wednesday night via White House Deputy Chief of Staff Dan Scavino, adding her own comment: “What ever happened to freedom of speech?” A verified fan account with 41K followers, @DonaldJTrumpTeam, has spent all of Thursday sharing articles and videos that claim to prove Black Lives Matter and Antifa were behind the attempted coup.

The only known official Trump campaign account, @TeamTrump, in contrast, shared videos of his latest statements — also posted to Twitter — including one from today in which he assures his supporters that "our incredible journey is only just beginning."

More troubling than copycat accounts and sympathetic messengers, though, are the continued, direct calls for citizens to take matters into their own hands and form militias in defense of the Trump presidency.

Parler users call for the formation of militias a day after extremists stormed Capitol Hill.

One Parler user posted: “There is a question that should be asked. What’s our next move? I suggest we form the militia and leadership inside the militia. But we need to fight under one banner as one united front or we will lose faster than a heart beat. But pray for peace! The militia should only be used as a last resort. We need to be a freedom coalition It is time to build militia base is all over the country [sic].” In the post, the user tagged accounts including @TheProudBoys and punctuated it with over a dozen hashtags, including #stopthesteal, #fightforfreedom, and #callthemilitias.

If Trump ever does show up, it will be his homecoming.

Parler has taken its stance, content to lap up the rewards of user engagement even as blood is spilled offline. And the platforms which enable it are just as much to blame. In their indifference, Apple and Google have chosen which side they’re on, too. For now, at least.