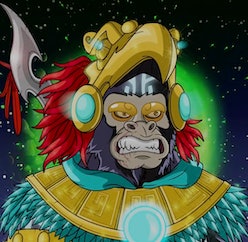 I, like so many of us, was both confused and intrigued by the introduction of the slurp juice ape memes into our social media discourse earlier this week. A cursory dive into its origins at first glance appeared to reveal yet another inane, nonsensical bit of NFT culture perfectly tailored for ridicule over the next two or three days before getting relegated to the online salvage yard. Once there, “multiple slurp juices for a single ape” would get repurposed every so often by those of us far too online for our own good, and that would be pretty much the end of it.

Less than 24 hours later, however, we received the tiny, necessary update on Buzzfeed News’ writeup confirming a sad but all-too-familiar online arc: the account behind the original “slurp juice ape” post had some very unsavory associations. Although publicly denying this, a trail of receipts appears to indicate a far-ranging web of crypto-fascist sympathizers and racist edgelord trolls, all operating on the nihilistic spectrum that makes it difficult to separate bad taste humor from actual violent ideology.

As confounding as the situation has become, one thing is certain: The meme’s creator and their problematic friends are loving the limelight, and we’re all worse off for it.

Following the breadcrumbs — In bizarre situations like this, it’s easiest (relatively speaking) to work backwards. The source of all our “slurp juice ape” jokes stems from a post made by the official account for yet another NFT marketplace, this one called RareCandy. The NFTs in question are actually two separate-but-related collections (Slurp Juice and Astro Apes), each available for purchase with prices ranging from roughly $200 to $3,500 or more via an alt-coin called Bitcoin Satoshi Vision (BSV).

Prior to the original tweet going viral, both RareCandy and another account, CoinYeezy, referenced one another’s projects in their respective Twitter bios. If you head over to CoinYeezy’s profile at the time of writing this, you’ll see a bio that reads, “PhD. Psychology. Supporter of facts, science & current political trends. Vaxxed [sic] Socially liberal. Autistic. Fuck nazis. (She/Her) #mybodymychoice #BLM.” Their profile picture and name feature emoji flags in support of LGBTQ+ rights, Ukraine, Israel, and Communism. Their website link is the only potentially incongruent portion, which takes visitors to a site promoting the release of Silk Road founder, Ross Ulbricht, who was convicted (among other things) of attempting to hire hitmen before his arrest in 2013.

That’s a far cry from CoinYeezy’s profile if you visited it a few weeks ago, a screenshot of which was shared with me anonymously. “$CEO Great Leader. Crypto-monarchist. Autistic. Definitely not a racist misogynist,” it once read alongside tags for profiles like RareCandy and Frog Cartel, the latter of which is an NFT collection that appears to obliquely riff on Pepe the Frog references and anti-vaxx memes. On Wednesday, CoinYeezy even went so far as to tweet, “wait till [sic] the blue hairs realize that slurp juice is just dog whistling for white supremacist misogyny,” the term “blue hairs” referring to feminists who dye their hair. CoinYeezy has similarly retweeted or liked similar racist, anti-vaxx, and misogynistic content.

Guilty by association — These would all be relatively tenuous associations, were it not for the fact that RareCandy recently retweeted CoinYeezy supporters as they dogwhistled support for the leftist-parodying rebrand in the days since their slurp juice ape meme went viral — in particular, RareCandy boosted yet another thinly-veiled reactionary NFT gag collection. Taken all together, these threads are all but imperceptible to the average Twitter user, which is more than likely the point.

When I DMed RareCandy for a comment on these links, they simply replied that they “are not associated with any problematic accounts.” Of course, this is hollow response that means basically nothing. Part of this is my fault for how I phrased the question (I first used the subjective term “problematic accounts” in my original message, which arguably allowed their non-answer), but I suspect that even if I asked another way, I would have received a similarly vague dodge. In the meantime, both RareCandy and CoinYeezy continue to retweet all us “normies” and “libtards” making jokes about slurp juice, unaware that the punchline is really on us. It’s as clever as it is disconcerting, and it’s time to take the “L” on this one, folks.

And so, unfortunately, here we are the end of Slurp Juice Ape Week 2022 — stuck down a very dark rabbit hole with no clear way forward other than a path dimly lit by anonymous crypto-trolls’ computer screens.