“I'm not sure if your collectors care that they're bidding on a secondary by-product, but I would.”

Golan Levin, Director of the Studio for Creative Inquiry 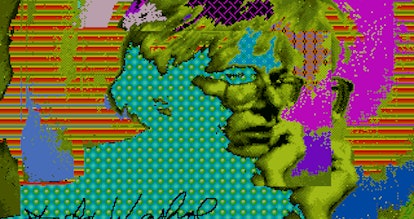 Christie’s entry into the NFT market has been anything but smooth-sailing, even if its crypto-backed auctions have been obscenely profitable. But as sketchy as PR stunts like Beeple’s Everydays: The First 5000 Days were, they at least weren’t as inaccurate and borderline misleading as the Andy Warhol: Machine Made series that hit the market earlier this week.

According to Christie’s announcement, Machine Made offers the “ground-breaking sale of five digital works created by Andy Warhol in the mid-1980s and recovered from obsolete floppy disks in 2014” by NYC-based artist Cory Arcangel alongside members of the Carnegie Mellon University Computer Club, The Andy Warhol Museum, the Carnegie Museum of Art, and the Frank-Ratchye STUDIO for Creative Inquiry as part of the Warhol Data Recovery Project.

“In a first for the nascent market for digital art and NFTs, five original drawings, which previously existed only as digital files, will be brought to life again in the form of unique NFTs (non-fungible tokens),” continues the auction’s description.

But as Golan Levin, Director of the Studio for Creative Inquiry, explained on Wednesday via Twitter, Christie’s newest NFT auction isn’t technically selling Warhol’s recovered Amiga files, but essentially “altered, 2nd-generation near-copies” of each digital rendering, a detail that could easily be overlooked by potential bidders, especially after reading Christie’s aggrandizing PR for the lot.

In his explanation, Levin details how the files currently available for bid were specifically upscaled from 320x200px to 6000x4500px by the Carnegie-Mellon Computer Club at The Warhol Foundation’s previous request for high-resolution copies. “It should be clear that a 6000x4500 image in Amiga's uncompressed .PIC format could not possibly fit on a 1.4MB floppy, nor in the Amiga 1000's 512kb RAM,” wrote Levin, “I'm not sure if your collectors care that they're bidding on a secondary by-product, but I would.”

According to the site’s official page, the sellers will use “all sale proceeds to benefit the [Andy Warhol] Foundation’s emergency relief fund for artists.” When asked for clarification if Christie’s would receive any of the profits, a representative responded, “Proceeds from Machine Made, after any appropriate offsets for carbon emissions associated with the minting process, will support the Foundation’s grantmaking [sic] initiatives inclusive of its substantial annual funding of The Andy Warhol Museum and its ongoing efforts to support artists throughout the country,” adding that previous unclear language on the Machine Made page “is in the process of being updated to reflect this.”

Christie’s starting bids for the five NFTs beginning at $10,000 — Warhol’s Untitled (Self-Portrait) has already reached a $28,000 bid at the time of writing this, with six days remaining in the auction.

Digital exhibition copies ‘at best’ — Speaking via email, Levin told Input that, in his opinion, “what's being offered in the Christie's sale could best be described as (upscaled) ‘exhibition copies’ that the Warhol Foundation asked our team to produce from the original files.” The term “exhibition copy” is really a polite way of saying “replica” in the art world — whenever an owner is wary or unable to lend an artwork for display at a gallery or museum, often a duplicate is created and displayed instead.

In other instances, no “original” artwork technically exists, as is the case with Felix Gonzalez-Torres' Untitled (Golden) from 1995. “Ownership of the work, which SFMOMA shares with the Art Institute of Chicago and the Solomon R. Guggenheim Museum in New York, consists in entitlement to fabricate it by buying a requisite quantity of gold plastic bead strings and installing them as a space-dividing curtain,” according to art critic, Kenneth Baker. “So every version of the piece constitutes an exhibition copy.”

NFTs complicate the issue even more — Even if one considers the pieces within Andy Warhol: Machine Made to fall within the already broad definition of “exhibition copies,” the introduction of their sale via NFTs only further muddies the artistic waters. Because the upscaled versions are to be distributed on a blockchain, the purchaser isn’t even technically owning the art itself, but “a blockchain-encoded certificate linking the buyer to ownership of an exhibition copy,” says Levin.

“For this reason, in my opinion, I believe it is not accurate to say that the buyer is getting an ‘original,’ especially given the emphasis that Christie's CEO has placed on ‘the possibility to secure the uniqueness and the authenticity of this work on the blockchain,’” he adds, referring to Guillaume Cerutti’s description of the auction during a recent interview with CNN.

Christie’s responds to confusion — In an official statement provided to Input by Christie’s and The Andy Warhol Foundation for the Visual Arts, the auction house writes:

Each of the five unique NFTs offered in the current sale at Christie’s points to a restored and preserved file, which retains all of the artistry of Warhol’s Amiga compositions. The files associated with the NFTs are the best representation of Warhol’s digital works carefully preserved for posterity, given modern technology.

Restoration and preservation of the original Amiga files was the clear and transparent goal of the 2014 project involving CMU, which in itself was an admirable feat of engineering that has been preserved for posterity, in a video posted on the Museum website and shared in Christie’s announcement of the sale. The original created files existed solely on physical floppy disks. In order to bring these works to the world, the floppy disks’ files were first copied. Because they were not recognized as any modern file type, the copied files were then converted to PPM, then to the modern PNG format. A scaled version was created to produce an image corresponding to what Warhol himself would have seen on the monitor.

“The process to ensure these works were not lost to history was only possible by the extraction of the originally created files on delicate floppy disks and their conversion to formats that are recognized by computers today. The NFTs offered for sale do not point to a physical floppy disc, but instead to the best representation of Warhol’s digital works, carefully preserved for posterity. ” - Michael Dayton Hermann, The Andy Warhol Foundation for the Visual Arts

Treating digital art as a legitimate medium, not a cash grab — What’s particularly strange about Christie’s latest digital art controversy is that it could have easily been avoided, or at least properly clarified for potential buyers. As Levin points out, “Christie's has entire teams of some of the world's top specialists dedicated to the handling and appraisal of things like Renaissance painting or Swiss watches. If they are going to start selling digital art, especially rare archaeological finds like these Warhol works, then they should hire or retain the services of actual digital conservation and retrocomputing experts. An expert of this sort would have caught the upscaling problem in a split second.”

Instead, it’s pretty clear that one of the world’s most recognizable auction houses is more concerned with milking the wildly unstable NFT market for everything it’s worth (and then some) rather than bolstering the legitimacy and importance of the digital art space, along with proper compensation for creators. Although Christie’s claims it will not receive any of the auction’s profits, if nothing changes, it won’t be long before it does under similarly suspect circumstances.