“I also want to thank every Amazon employee and every Amazon customer because you guys paid for all of this.” 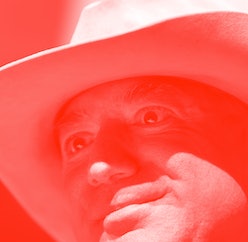 Former Amazon CEO Jeff Bezos blasted himself to the edge of space early this morning next to his brother, an 18-year-old high school graduate, and an octogenarian named Funk. Upon his return from the approximately 11-minute, multimillion-dollar voyage aboard Blue Origin’s New Shepard rocket, Bezos proceeded to immediately remind everyone why he’s a goddamn bastard who should be stripped of his wealth and any future access to realizing his space colonialist dream.

“Best day ever,” he rubbed in our faces as soon as he exited his spaceship company’s landing pod. “I also want to thank every Amazon employee and every Amazon customer because you guys paid for all of this.”

Bezos’ 62-mile-high jaunt comes the same day as reports that an Amazon warehouse worker miscarried after being denied pregnancy accommodations while others are forced to piss in bottles to meet daily quotas.

Second-place Billionaire Boy — Unfortunately for Bezos, he does not get to claim the title of First Billionaire Boyz Club Member in Space. That particular bit of ignominy goes to Virgin CEO “Sir” Richard Branson, who flew slightly lower (just above the U.S. recognized, 55-mile-high edge of space) than Bezos did nine days’ earlier, on July 11. Bezos’ Blue Origin wanted to make it very clear that “Well, actually,” Branson’s journey didn’t totally count if we’re judging by international standards. We aren’t. The only standards by which we are basing our judgments are the standards of common human decency and compassion. In which case, both Bezos and “Sir” Branson have failed miserably multiple times over.

The SPACE Tax Act — Not long after Bezos’ literal ego trip, Representative Earl Blumenauer of Oregon announced the Securing Protections Against Carbon Emissions (SPACE) Tax Act, which would essentially be a carbon tax levied on private citizens and companies heading up on their future space vacations. “Space travel isn't a tax-free holiday for the wealthy. We pay taxes on plane tickets,” Rep. Blumenauer tweeted. “Billionaires flying into space — producing no scientific value — should do the same, and then some!”