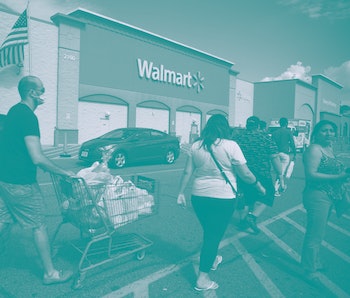 The final deal for an American company to purchase TikTok’s U.S. operations could be announced as soon as tomorrow, according to people familiar with the company’s workings who spoke to CNBC. The sale, which is expected to be valued somewhere between $20 billion and $30 billion, will likely go to either software conglomerate Oracle or Microsoft in partnership with Walmart.

Yes: tomorrow Walmart may own TikTok’s operations in the U.S., New Zealand, and Australia. Along with Microsoft, that is.

TikTok has reportedly chosen a bidder, though the sale has not been finalized just yet. And it may never be if China has its way: just this past week the country’s government announced sweeping new rules that could allow Beijing to veto any potential deal.

With the Trump administration’s anti-China sentiment at an all-time high, the future of TikTok is anything but certain. If the deal falls through, Trump has said the viral video app will be banned in the U.S. beginning on November 12.

We later found out that Walmart has actually been in the running for the TikTok bid for a while now. But the U.S. government pushed for a technology company to lead the deal, which is why Walmart dropped its own bid and tagged onto Microsoft’s.

Oracle, the second-largest software company in the world, has also expressed interest in purchasing some of TikTok’s operations. President Trump hasn’t explicitly endorsed either of these companies’ bids, but Oracle does have intimate ties to the Trump administration. And Trump has said Oracle is “a great company” and that it “would be certainly somebody that could handle it.”

Still room for it to all go downhill — TikTok is expected to announce its choice of bidder in the next day or so. Even once that happens, though, there’s no certainty to the deal.

The latest plot twist: China might be trying to stop the TikTok deal from going through. The country’s running list of technology that must be approved for sale to foreign buyers was updated last week — for the first time since 2008 — to include data processing and speech and text recognition. Experts say this update will likely force TikTok to obtain government permission before selling parts of its operations to a U.S.-based entity.

ByteDance’s general counsel says the company is studying the new regulations — and that it will, of course, follow any and all applicable laws in both the U.S. and China.

Tomorrow we’ll likely know more about which companies will be moving forward with their attempted buy-out. But if TikTok’s sale is banned outright by the Chinese government, it will effectively kill the company’s operations in the U.S. Enjoy the chaotic memes while you can, kids.