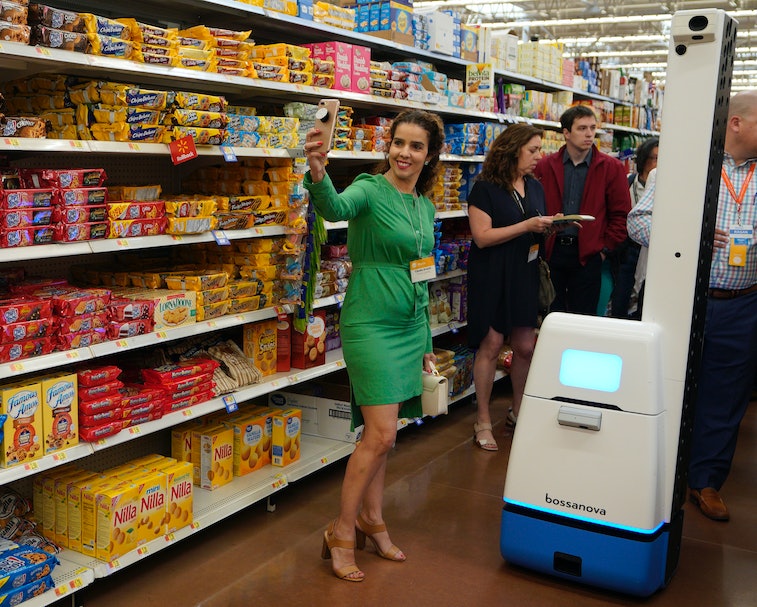 Walmart has decided to can its five-year plan to add re-stocking robots to its fleet of workers, in a strange and sudden reversal of the company’s previously announced plans. The company has been testing its fleet of robotic workers for years now — but Walmart has resolved to dissolve its contract with robotics company Bossa Nova Robotics Inc., which in turn has had to downsize its human workforce.

People familiar with the matter told The Wall Street Journal the retail conglomerate — which is also the largest private employer in the U.S. with more than 1.5 million staff — ended the partnership because it found human workers were as fast and as good as robotic ones... and that the robots made some employees and customers uncomfortable.

The Bossa Nova robots had already been deployed in about 500 Walmart stores before the dissolution of the company’s contract. Back in January, Walmart said it hoped to bring the robots to about 1,000 of its 4,700 U.S. stores.

The decision will no doubt be a sizable setback to the robotics industry. In a world where robots are heralded as a boon for productivity and the potential end to menial labor for humans, Walmart’s decision delivers a heavy — and much-needed — dose of reality.

A human toll — Walmart’s decision isn’t just putting a bunch of six-foot-tall robots out of work — there’s a human element to the decision, too. Human workers will keep their jobs at Walmart, and the retailer will likely take even more on to make up for the shortfall from axing the robotic helpers, but those that work to create the retail robots won’t be so lucky.

“We see an improvement in stores with the robots, but we don’t see enough of an improvement,” Walmart reportedly told Bossa Nova. Bossa Nova was forced to lay off about 50 percent of its staff after the contract with Walmart ended, a person familiar with the situation said. The company is reportedly changing its business direction now toward new clients and software ventures.

What do you mean robots aren’t always better? — The prevailing narrative about robots is that they’re inherently more productive than human workers. This notion has become so wedged in the discourse around automation that any alternative can seem unimaginable.

And yet: here is Walmart, one of the largest retailers in the world, finding just the opposite to be true in practice. Robots are indeed helpful in many situations; in others, replacing humans is less successful and, crucially where a bottom line is involved, less cost-effective.

Walmart says it isn’t completely scrapping the idea of automating its stores. A spokesperson for the company told the WSJ that Walmart will “continue testing new technologies and investing in our own processes and apps to best understand and track our inventory and help move products to our shelves as quickly as we can.” But for now, if you see a robot panhandling, you know why.