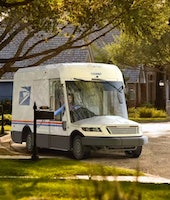 It’s looking a lot like the all-electric USPS trucks won’t be gracing most of our streets — at least not in the near future. The Postal Service is still planning to buy about 5,000 of the strange, duck-looking electric vehicles, but the Postmaster General is also shutting down any hope of that order being extended.

The Biden administration and the EPA have urged the USPS to purchase more electric trucks as movement toward the White House’s goal of significantly reducing vehicle emissions by 2030. Instead, the USPS has decided to go ahead with its plan of using $11.3 billion to buy new mail trucks that run on gas instead.

When the USPS first unveiled designs for the all-electric postal vehicles (exactly a year ago, actually), we very much felt both shock and awe. Sure, the new trucks are a severe aesthetic departure from those we’re used to seeing roam the streets, but they’re also future-forward, a somewhat rare instance of a government agency actually acknowledging its effects on climate change. The hope we felt has now been dashed to pieces. Typical.

A money man — Postmaster General Louis DeJoy — who you may remember as the man who shut down mail-sorting machines leading up to the 2020 presidential election — is still running USPS. And this new take on the all-electric mail fleet has his stink all over it.

“Our commitment to an electric fleet remains ambitious given the pressing vehicle and safety needs of our aging fleet as well as our fragile financial condition,” DeJoy said in a statement.

This decision would come across as much more genuine if DeJoy hadn’t just approved more than $11 billion in USPS budgetary funds to upgrade to gas-based vehicles instead.

But…the climate? — The USPS has been using old vehicles for decades now. An overhaul of the fleet is long overdue. Now the opportunity to do just that has presented itself — and DeJoy has made the executive decision to just buy more gas vehicles instead.

Vehicle emissions are one of the top contributors to climate change. They also happen to be one of the easiest to cut out of our daily lives. The general public is catching on to this, leading to a pretty massive bump in EV production across companies.

DeJoy and other executives had a choice with their current budget: Invest in a future-forward solution that had already been developed for them, or stick with gas-powered vehicles, thereby continuing to contribute to climate change. And DeJoy has chosen climate change.