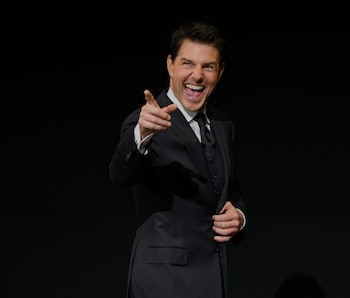 In a development likely to surprise absolutely no one, the United States and Russia are again competing for a new “first” in space: filming a movie. Who’s going to tell them someone’s already beat them to it?

The Russian space agency, Roscosmos, announced yesterday that it’s teamed up with Channel One Russia and Yellow, Black and White studio to film a movie tentatively called “Vyzov” (translation: Challenge) aboard the International Space Station. Liftoff is scheduled for fall of next year. Naturally, the announcement comes on the heels of an update on the NASA-approved plan to blast Tom Cruise into space (seriously) for the first-ever action movie filmed in orbit. That flight is now set for… fall of next year.

In this economy? — Everyone thought it was a joke when Deadline first broke the story back in May that the Mission Impossible star could soon be heading to the ISS for an in-space action film. Well, everyone except Russia, apparently.

We are in the midst of a pandemic and economic crisis, not to mention the daily humanitarian crises stateside that continue to outdo each other, so the thought of such a gratuitous undertaking — an excessive waste of money and resources just for the sake of saying you did it — couldn’t feel more ill-timed. And excessive it would be. It costs a lot of money to ship things (and people) to the ISS, starting at a minimum of about $2,000 per kilogram and reaching upwards of about $20,000/kg. That’s on top of the $35,000 or so per person per day it’d cost someone to travel to the space station when accounting for basic needs like life-support and food.

Nevertheless, NASA confirmed the story’s validity at the time and Elon Musk (of course) found a way to muscle himself in. Cruise will fly to the ISS aboard a SpaceX Crew Dragon capsule.

There’s little in the way of details beyond that it aims to be “the first narrative feature film – an action adventure – to be shot in outer space,” per Deadline, but Space Shuttle Almanac informed us this week via Twitter that a tourist mission with director Doug Liman and Tom Cruise is slated for an October 2021 launch. Pandemic and impending civil war be damned, we’re making a movie in space.

Not to be outshone, Russia had its answer ready a mere four days later. The plan, so far, is as follows:

Klim Shipenko (Salyut 7, The Peasant) will direct the movie, with Dmitry Rogozin, Konstantin Ernst, Sergei Titinkov, Eduard Iloyan, Denis Zhalinsky, Vitaly Shlyappo, Alexey Trotsyuk as general producers of the large-scale project. The plot will include a flight to the International Space Station (ISS) scheduled for autumn 2021 on the Russian Soyuz MS crewed spacecraft. Currently, the parties are discussing the details of the future movie, including the scenario, technical capabilities of the filming process, as well as the cast. The protagonist to fly to the ISS, as well as his backup will be selected during an open contest. The title of the picture is yet to be confirmed. The movie is aimed to popularize Russia’s space activities, as well as glorify cosmonaut profession.

It’s not technically the first, though — Both NASA and Roscosmos may be gunning for first place on this one, but that crown already belongs to videogame developer Richard Garriott, who embarked on a $30 million trip to the ISS in 2008 and from there created an eight-minute science fiction film called “Apogee of Fear.” Sure, it wasn’t feature-length — but it was considered significant enough for NASA to deny Garriott permission to release it publicly. As a result, you may have seen a documentary about Garriott’s trip to the ISS but not the history-making short film he actually shot there. We learned a lot from that undertaking, however, the most relevant takeaway being that the microgravity environment of the ISS is not exactly well-suited for an action film. Go figure.

"Everything in space, the real stuff in space, is not action movie fast, it is slow and deliberate," Garriott told Cnet earlier this year, following the news of the planned Tom Cruise movie.

"The reality of filming in space may mean that either they will find that filming a lot of those action scenes will have been easier on Earth, where it's more controllable, or they will have to adjust what they mean by an action movie. More like 2001, where it's more psychological than it is like a knife fight." Good luck, though!

In space, no one can hear you scream — Regardless of who ends up actually filming the first feature-length movie in space, the ISS itself is a multinational collaboration — one in which both the U.S. and Russia are major players. Beyond matters of ego, we’d be better served not having countries shove each other out of the way in order to beat their chests atop the next big commercial space opportunity. Especially when there's still so much valuable science to be done.

That, of course, is an argument that goes all the way back to the beginning of space exploration itself and it doesn’t look likely to change anytime soon. After all, it only took one day for Roscosmos to claim Venus as “a Russian planet” after an international team of scientists announced they’d found what could be signs of biological activity on the planet often said to be Earth's (somehow) more hellish sister.