“Our system is broken. Amazon took full advantage of that, and we will be calling on the labor board to hold Amazon accountable for its illegal and egregious behavior during the campaign.” 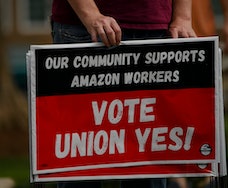 A Twitter thread by More Perfect Union accuses Amazon of attempting to corner the United States Postal Service into creating an illegal ballot dropbox to influence the union election.

The union argues that Amazon pushed the USPS to put up the box in front of the Bessemer, Alabama, warehouse. Through a Freedom Of Information Act (FOIA) request, the Retail, Wholesale, and Department Store Union (RWDSU) highlighted how a month before the union vote, Amazon “repeatedly calls USPS's 'strategic account manager' to say they want to install their own box.” USPS claims that it rejected the request for the “private box.”

If the union can definitively prove that Amazon exerted illegal influence on the election, it may have the power to contest a negative election result, potentially extending this long and bitter battle between labor rights activists and Jeff Bezos’ company.

Defeat in the cards — According to The Washington Post, union supporters sound pessimistic about their prospects of winning the election. So far, 3,215 ballots have been counted. No votes are at 1,000 while yes votes have come up to 463.

Stuart Appelbaum, the president of the RWDSU, told the outlet, "Our system is broken. Amazon took full advantage of that, and we will be calling on the labor board to hold Amazon accountable for its illegal and egregious behavior during the campaign." Amazon could be legally tried for violating labor laws if the union can prove that it pressured the USPS to install the mailbox in order to jeopardize the election campaign,

According to The Post, Postal Service spokesman David Partenheimer justified the mailbox's presence, saying it was "suggested by the Postal Service as a solution to provide an efficient and secure delivery and collection point." An attempt by Amazon to exert influence on the election with an illegal mailbox wouldn’t surprise observers who have kept an eye on the company's aggressive tactics to throw union fighters off.

In the recent past, Amazon has looked into the use of surveillance software to keep an eye on union-sympathetic workers, creating an atmosphere of intimidation and discouragement. The software program is called geoSPatial Operating Console (SPOC), which maintains track of union and non-union "threats" in employee ranks. Amazon also issued "Vote No" pamphlets before the union drive to discourage workers from voting yes. Getting the USPS to install a mailbox outside one of its most labor contentious warehouses doesn't sound like an impossible deed for the Amazon executive branch.