“Any business model that relies on shortchanging workers in order to make it probably shouldn’t be anywhere, whether California or otherwise.” 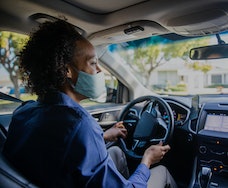 In the face of California gig worker laws, Uber is considering a suspension of its services in the state, CEO Dara Khosrowshahi said in an interview with MSNBC. This is not, by far, the first time Uber has struggled against the new California laws.

“If the court doesn’t reconsider, then in California, it’s hard to believe we’ll be able to switch our model to full-time employment quickly,” Khosrowshahi said.

It’s nigh-impossible to tell whether or not Khosrowshahi is bluffing here — pulling out of California would be a huge undertaking that would surely hurt the companies bottom line — but the act of doing so may be less important than the effect of Khosrowshahi’s words. The implications of his statement are clear: Uber would prefer to pull its entire operation than to give its hard-working employees the benefits they very much deserve. Or perhaps it's model is predicated on exploitation and can't actually exist any other way.

A long, messy fight — Uber and its main competitor Lyft have been fighting tooth and nail against California’s gig-worker laws the state introduced in late 2019.

That law calls Uber drivers “employees,” which means their employer is responsible for providing them with healthcare benefits and layoff protections. Uber has long considered its drivers “independent contractors” — as justification for not providing those essential benefits. Both Uber and Lyft brought the case to court in an attempt to reverse that classification.

Last week, a judge determined that, no matter how much the companies would like them to be, Uber and Lyft drivers are not independent contractors. Both companies plan to appeal this decision, of course.

Uber wants another option — Uber is coming to realize that it’s fighting a losing battle. And so the company is scrambling for an option that will allow it to concede some benefits to its drivers without giving them the full power of the “employee” designation.

Uber’s “third way,” as Khosrowshahi called it in a New York Times op-ed, would include a mutual benefits fund that workers could tap into for paid time off or healthcare, based on the number of hours they work. The company, along with other gig-worker businesses like Doordash and Instacart, are putting their weight behind ballot measures that would allow California residents to vote in November for their exemption from the gig-economy law.

Just give them benefits already — Uber’s ultimatum to leave California if last week’s decision is not appealed is a dangerous one. It could leave thousands of drivers without an income until November at the very least. And apparently Uber is just totally fine with laying those employees off if it means getting what it wants.

It’s obvious at this point that Uber is struggling. Ride-sharing has been hit particularly hard by the COVID-19 pandemic, with a dip in sales up to 70 percent in big cities. Nonetheless, Uber has told investors it could survive until the end of the year with an 80 percent decrease in customers and still have $4 billion in cash-on-hand.

But the company’s swiftly failing business model should not come at the expense of its employees. The company would rather horde its cash and fully pull out of California than deal with the implications of calling its workers what they are. The company’s view of its drivers — as pawns for a legal game — is very revealing about its priorities, and about the dangers of letting companies built unsustainable models built on landgrab-orientated pricing models that hurt workers.