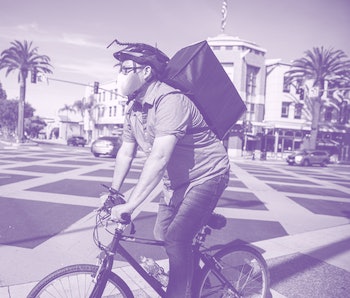 Uber has acquired Postmates, the popular U.S.-only delivery service, for $2.65 billion, the two companies announced today. It’s by far the most significant expansion of Uber’s delivery services since the company first introduced UberEats in 2014. The deal is set to close by Q1 of 2021.

The expansion of Uber’s food-delivery services makes sense for the company’s future; its ride-hailing roots have taken a major hit in 2020 thanks to the ongoing pandemic. But it’s also a tenuous move from a company that’s under constant scrutiny for not paying its workers livable wages.

Whether or not Uber and Postmates will succeed moving forward is unclear — but the companies will certainly be fighting an uphill battle on this one. Food delivery isn’t exactly a profitable sector, even with the slight stay-at-home uptick in business from the pandemic. We can only hope the companies’ workers don’t serve too much as collateral in the deal.

What does this mean for the drivers? — Uber and Postmates are still going to operate as separate websites and applications, at least in the immediate future. It’s not clear from Uber’s acquisition announcement whether or not Postmates will now have the exact same merchant selection as Uber Eats and vice versa.

On some level, at least, Uber Eats drivers will now also be Postmates drivers. Uber says both apps will be “supported by a more efficient, combined merchant and delivery network,” which points to the two companies’ fleets becoming one. Uber alludes to drivers having the ability to pick up orders across both networks to increase efficiency.

Uber’s not doing so hot — At the peak of the pandemic, Uber saw its ride-hailing business dip about 80 percent. Though the company is reporting better numbers since that point, the pandemic is still really, really bad in many places — which means ride-hailing isn’t likely to return to normalcy for a long while.

Uber Eats has really been the company’s only saving grace during the pandemic, as more people turn to contactless delivery services to avoid human contact. Since mid-March, Uber Eats has seen an 89 percent year-over-year bookings increase.

Uber’s Hail Mary — This move is looking a lot like a Hail Mary from Uber — the company has only really seen any growth from food delivery this year, so it’s doubling down on that sector whether it has the cash-on-hand to do so or not. This will definitely expand Uber’s delivery network, but it’s less clear whether or not it will be profitable. Uber isn’t exactly known for being profitable.

Something else Uber isn’t known for: being considerate of the drivers that power its services. How exactly the acquisition will affect drivers — whether or not there will be layoffs or wage changes, for example — remains to be seen. This could just add extra chaos to an already hectic job. Based on the company’s track record, we won’t be holding our breath for better treatment of Uber’s workers any time soon.